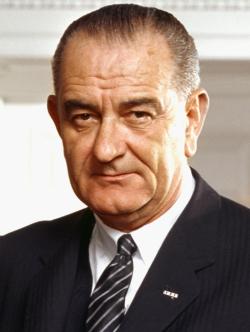 Not only is the 2015 version of LeBron James the best basketball player ever, he is doubtless the most popular LBJ in American history.

I love the old guys.  Wilt Chamberlain was a physical freak.  Kareem Abdul-Jabber’s sky hook was a devastating offensive weapon.  Michael Jordan was dominating for almost a full decade.  Magic Johnson was a versatile killer.  Larry Bird was the best among a great roster.  Bill Russell did nothing but win his who career.

Still, what LeBron James is doing right now in these NBA Finals is the most incredible feat in the history of American team sports.  On a team with mediocrity everywhere on its roster – J.R. Smith, Timofey Mozgov, Matthew Dellavedova, Iman Shumpert, Tristan Thompson, and former Pacer James Jones – the Cavs are on the brink of winning an NBA Championship because LeBron is just that good.

We’ve seen what happens when Kobe Bryant is surrounded by mopes, and Lakers have seen it up close for years, so I dismiss Kobe as part of the GOAT discussion.

LeBron has scored 44, 39, and 40 or more point in the three games in these finals, which are now possibly two games from being over.  And he’s averaged 12 rebounds and 35 shots too.

Basketball has long been thought to be a sport where one player can propel a team through short bursts of success, but championships can only be won by a team.  If LeBron wins this series for the Cavaliers, he will be the first to win as a solo artist rather than duo, trio, or ensemble.

Wilt had Jerry West and Elgin Baylor.  Kareem had the Big O, Magic, and James Worthy.  Kobe had Shaq and vice versa.  LeBron had Dwyane Wade and Chris Bosh.  Russell had John Havlicek and Bob Cousy.  Michael had Scottie Pippen.  Bird had Robert Parrish and Kevin McHale among others.  Julius Erving had Moses Malone.

If you combine the regular season win shares of the Cavs roster remaining after injuries to Kevin Love and Kyrie Irving, the total is approximately 23, and during the Finals, LeBron has taken several steps up over his regular season self.

The declaration that LeBron’s career is the greatest of all-time can’t come close to being made yet.  That’s a conversation for several years from now because LeBron is only 30, and we don’t know the future.  Right now, LeBron’s two championships pale in comparison to Russell’s 11, Jordan’s six, Magic, Kobe and Tim Duncan’s five, and Bird’s three.

LeBron has won only one scoring championship, but since his rookie year his scoring average has been relentlessly within the 25-30 points per game range.

Regardless of what your feeling about LeBron’s career, or what he meant to the Cavs during the regular season, what we are watching in these NBA Finals is something different – something beyond the abilities of everyone who has ever played basketball.  LeBron is winning a championship all by himself.  The Cavs are one made free throw in Game One from being one win away from a sweep.

If the Cavs win this series and the championship, there will be very few teams in the NBA that would not be viewed as favorites to win the 2016 title if LeBron magically appeared in their city.  The Bulls, Pacers, Hawks, Wizards, Raptors, Bucks, Celtics, Nets, Heat, and Hornets would be easy favorites to win the East with LeBron.

No one in the history of the NBA has meant so much to his team than LeBron means to the Cavs right now.  That makes him the best to ever play – in this very limited window of comparison.  Best career?  No.  Best right now compared to best then for everyone else?  Yes.