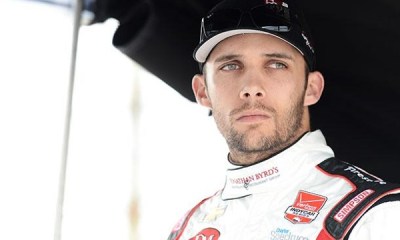 Bryan Clauson died yesterday after a crash. He will be missed.

I got to spend a lot of time around Bryan Clauson the last two Mays as he prepared to drive the Jonathan Byrd’s Racing entry in the Indianapolis 500.  I was one of the lucky who got to know him a little bit.

Talking to a guy on the radio is sort of strange in that unlike real life, you ask the person you are interviewing the kind of questions that even friends might be uncomfortable posing.  The result is getting to know a person a little bit faster.
Getting to know Bryan just that little bit, I can tell you a few things – he loved racing, and he loved his family and fiancee.  He was a very normal guy with a very abnormal job.
Some drivers have a haughtiness about them – maybe regal is a better word.  They aren’t obnoxious, but because of the risks they take on a regular basis they kind of operate on a different plane.  Bryan wasn’t like that.  He was an ordinary guy in the very best way.
If not for the fire suit, Bryan would have been indistinguishable from the members of his race team or the fans who gathered around his garage at the Indianapolis Motor Speedway hoping to get an autograph.
Next May will be very different.
Here is a statement from Bryan’s family released earlier today by USAC:

Last night, the 7th of August, we said goodbye to our son, my fiancé, our friend, Bryan Clauson. He was surrounded by family and friends and we were grateful that we could experience his final moments with him.
Our Bryan fought to the end with the same desire that he demonstrated behind the wheel of all the various race cars he would park in victory lane. However, we were more proud of our Bryan that took a moment to make a young fans day, or demonstrated his uncommon kindness and appreciation toward his friends, family and fans.
We would like to thank everybody who has shown their concern toward us and kept us in their prayers. We will never be able to truly thank you. We would also like to thank the staff at Bryan Medical Center who stood and fought with our Bryan since he arrived here early yesterday morning.

We know that our Bryan is also your Bryan and that you would like to participate in honoring him. A service will be held at the Indianapolis Motor Speedway at a date and time to be announced soon.In lieu of flowers, or to make a donation, people may direct their contributions to the USAC Benevolent Fund website at http://usacbf.org/cash-donation/ or checks can be made out to the USAC Benevolent Foundation in the name of Bryan Clauson. The address is 124 E Northfield Drive, Suite F #129, Brownsburg, IN 46112.

Thank you for being a part of our Bryan’s life.
-The Clauson Family