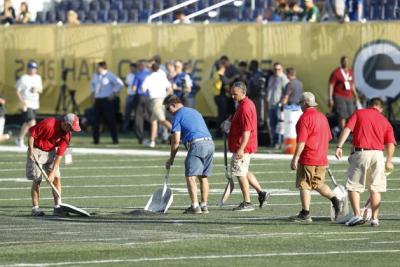 By now, we all know the NFL Hall of Fame Game between the Indianapolis Colts and Green Bay Packers was cancelled last night due to unsafe field conditions caused by the Hall of Fame itself.

People who drove from Indy or Green Bay to enjoy an evening of football played in celebration of former Colts Tony Dungy and Marvin Harrison, and Packers great Brett Favre left Canton quite disappointed, regardless of the full refunds promised to all ticket holders.

Seeing the silver lining to the self-induced cloud that caused the cancellation will be too much to ask of ticket holders, but for those who planned to watch part of the game on TV, there are some positives.

9 – We got to see Michael Phelps win a 19th gold medal and Katie Ledecky set a world record.  The Olympics are a big deal, but pale in comparison to the preseason opener for a local NFL team.  Colts and Packers fans would have rather watched fifth string guards battle for a roster spot than pay attention to the world’s best male freestylers cavort in a Rio de Janeiro pool.  With the game’s cancellation, we all got to enjoy swimming history as Phelps extended his record for gold medals to 10 beyond the next best.

8 – No judging Andrew Luck today.  If Luck had gone 2-6 for 18 yards and a pick, Indianapolis would be in a state of advanced funk.  Worse, if he had completed all seven passes for 126 yards and two TDs, fans would be preening about town crowing about a Super Bowl.  No point in welcoming either doom or dreams of glory into our August until we have to.

7 – Ryan Kelly didn’t miss a thing.  Fans and media were all terrified that first round draft pick Ryan Kelly might lose opportunities to bond with his offensive line mates and quarterback, but as it turns out he got as many reps last night as anyone else.

6 – Bob Lamey gets another week to heal.  When I saw Bob at Colts practice Thursday, he had an eye patch like a pirate.  I’m not sure what’s going on with the eye or whether the patch was off for last night’s game, but losing all depth perception cannot enhance the quality of play-by-play from the long time voice of the Colts

5 – Radio hosts not grading the work of right guards Denzelle Good, Hugh Thornton, and Joe Haeg.  Trying to figure out who among the three potential starting right guards might have played best against a constantly shifting group of defensive linemen would have been futile and headache inducing, but we would have tried anyway.  As it stands all are basically equal, and none of us appears any dumber.  It’s a win-win!

4 – This should give the NFL a good excuse to reset priorities.  Over the past decade, the NFL appeared to be the highest and the mightiest of entities.  Because their business model and popularity make it nearly impossible for the NFL to be seen as a failure, the arrogance of those at league headquarters has metastasized into a giant hubristic blob.  With the cancellation of a significant event due to silly men overlooking a key detail – the playability of the field – perhaps this will take the bigwigs down a notch or 15 and deflate their balloon a bit to allow for the possibility that NFL brass were not declared by God himself to be omnipotent.

3 – Listening to Hall of Fame President and Executive Director David Baker make lemonade out of lemons.  In explaining the cancellation of the game due in part to his own ineptitude, Baker actually said, “One of the doctors shook my hand after we made the decision. He said, ‘I think this is the greatest statement in the history of the league in terms of respect for players and their safety.'”  Never admitting a mistake is often confused in our society as never making a mistake.  Listening to Baker wave his own freak flag during a time of advanced strife and career peril was both comical and emboldening.

2 – Nice to know even the NFL can screw up big.  Big events can be very tough to pull off, as those who do it for a living will tell you.  When they NFL has to tell ESPN’s John Skipper that a revenue and ratings generator like opening night can fall completely apart, the rest of America who have promised and under-delivered can empathize and enjoy.

1 – Four preseason games is plenty.  Two preseason games is all that is really needed for teams to prepare for the season, but no one in the NFL wants to give up two paid dates, so the schedule stays as is.  Fans are gouged to watch expanded rosters battle one another in games that are forgotten upon completion of the preseason.  It’s a strange little dance everyone does during August because there isn’t a hell of a lot else to talk about.  The elimination of this bonus contest gives us one less meaningless contest to talk about.