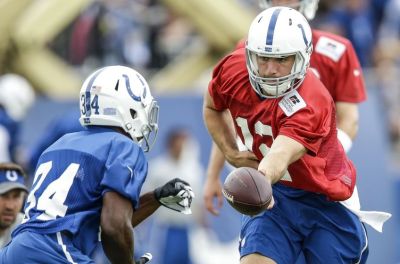 Andrew Luck hands to Josh Ferguson at camp. One has a job locked down. The other does not.

So many decisions – so much time.

Camp for the Indianapolis Colts has been uneventful through the first two weeks.  No big issue injuries, and no real clarity in some position battles that will go a long way toward determining whether the Colts will roll into the playoffs or miss the big circus for the second straight year.

Fortunately, the Colts coaching staff has another month of workouts and preseason games to evaluate, teach, and scour the waiver wire to find plug and play options if no current Colts show the ability to take control of a position.

It would be better if the Colts had fewer question marks, but remember last preseason when the Colts had the starting lineups almost entirely locked down?  How did that work out?

The silt will continue to settle, and hopefully the answers will come clear for the Colts coaching staff as they try to validate the confidence shown by owner Jim Irsay when he decided to extend the contracts of GM Ryan Grigson and coach Chuck Pagano.

Here are the 10 positional battles that bear watching through the preseason:

10 – Punter/stand-up comic.  The Colts signed Michael Palardy a few days ago to push McAfee, not as a punter and kickoff specialist, but as a stand-up performer.  While the Broomstick is still fully functional, Grigson would like to see McAfee rely a little less on improvisation during his stand-up.  Grigson wants McAfee to be a little more polished – like a Jerry Seinfeld – who is a verbal tactician with consistent performances rather than the manic story driven entertainer he is today.   Of course, this is nonsense.  McAfee is as good a leg as there is in the NFL.

9 – Right tackle.  Joe Reitz seems to have the job locked down, but he is so valuable as a backup at every spot on the line other than center, it would be nice if Le’Raven Clark stepped up to earn the spot at some point this season.  Hey, I think the world of Reitz and would like nothing better than for Joe to get paid as a starting tackle, but the Colts are a better team with him as a floater who can be a plus player as an injury replacement when someone bends the wrong way.

8 – Back-up play-by-play voice.  Bob Lamey is going to be 78 years old in December, and while he might keep chopping wood in the booth for another decade like the Hoosier version of Vin Scully, Lamey might decide to step down if the Colts experience another big season.  Matt Taylor has shown himself to be a very talented play-by-play voice when filling in for Bob and during other assignments.  Kevin Lee did a game for the Colts a few years ago when Bob could not go.  And there are other guys who would crawl across broken glass to get one of 32 NFL franchise radio gigs.  While Kevin is really good, my money is on Matt because he is already in house, and loyalty means a lot with the Colts.

7 – Back-up wide receivers.  T.Y. Hilton, Donte Moncrief, and Phillip Dorsett are all set as the three starters as the Colts move to a three wide offensive set.  Behind that group, it is another story.  Quan Bray has the advantage of being a solid return guy.  Purdue fans would like to see Danny Anthrop get a shot as a Wes Welker/Griff Whalen type slot receiver.  I have no inkling how this competition plays out prior to seeing candidates during live action.

6 – Defensive tackle.  David Parry was respectable as a rookie, but the Colts drafted Hassan Ridgeway out of Texas in the fourth round, like Zach Kerr, and think T.Y. McGill can make plays.  It’s likely that the middle of the Colts defensive line will be manned by a committee of rotating tackles, but I like the steadiness of Parry.

5 – Cornerback opposite Vontae Davis.  Patrick Robinson was signed as a free agent during the off-season, and it appears that D’Joun Smith is finally healthy.  Neither is a perfect replacement for the departed and flawed Gregg Toler.  Robinson is built like a slot corner and Smith was able to play only eight snaps last year after being drafted early in the third round of the 2015 NFL Draft.  Let’s not forget Darius Butler, who is a quality slot guy in the nickel, but not a positive when lined up wide.  The Colts might need to scour the waiver wire to find their other wide corner.

4 – Back-up running back.  This is an important position for the Colts to fill with competence because Frank Gore is 33 years old.  Robert Turbin has the advantage of a very cool name and a bit of a track record as a backup running back with the Cowboys, but I get the feeling the Colts coaches would like to see Josh Ferguson – the undrafted free agent out of Illinois – get the job.  My money is on Ferguson if he can stay healthy.

3 – Inside linebacker replacement for Jerrell Freeman.  Nate Irving is finally healthy and Sio Moore is an okay player, but the most intriguing candidate for the job is rookie Antonio Morrison, who has a nose for the ball and seems to enjoy hitting people more than the average linebacker.  Morrison was the first player in almost a quarter century to ring up 100 tackles in back-to-back seasons for Florida.  My guess is the job is Irving’s until Morrison builds enough trust with the coaches to stay on the field.  The preseason will be very important for Morrison.

2 – Safety beside Mike Adams.  T.J. Green is a rookie out of Clemson with great straight line speed, and second year safety Clayton Geathers is still recovering from a broken bone in his foot.  Winston Guy is a fourth year player out of Kentucky.  Green is too young, Geathers isn’t healthy, and if Guy could play the Colts wouldn’t have drafted Green in the second round this year after taking Geathers last year in the fourth round.  My guess is that the Colts starting safety opposite Adams is not yet a Colt.

1 – Right guard.  This is a fun battle among three really good guys.  Hugh Thornton is the Colt the coaching staff has hoped would blossom into the right guard since drafting him in 2013.  Because of injury and indifference, the affable and funny Thornton has yet to live up to his potential.  Denzelle Good did okay work at right tackle last year as a seventh round pick out of Mars Hill.  He has the size and athleticism to be quality guard if he gets the required footwork figured out.  Joe Haeg is being mentioned as a candidate, and Jonotthan Harrison is capable too.    My guess is that Good will be good enough.