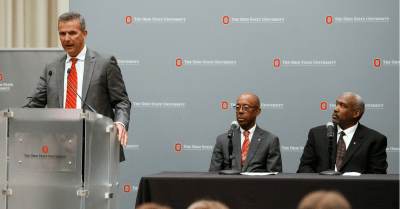 Urban Meyer does not operate as well at a press conference as he does on the sideline.

Ohio State head football coach Urban Meyer was suspended yesterday for the first three games of the season as the result of a university investigation into his handling of a 2015 domestic violence complaint by the wife of an assistant coach.

I get it.  Domestic violence is a societal scourge, and its victims deserve our exhaustive efforts to help them escape the world of perpetual fear and danger in which they live.

But is former wide receivers coach Zach Smith torturing his wife Courtney a problem Meyer should be held accountable for not solving?  If his continued employment of Smith endangered his wife – certainly.  Whether that was the case is impossible to accurately assess.

There were some irregularities uncovered during the investigation.  Athletics director Gene Smith recommended Zach Smith’s dismissal in 2016, and Meyer asked an associate AD how to delete old texts.  He lied at a press conference about his awareness of the 2015 accusations against Smith.

Obviously, Meyer was less than graceful in dealing with his assistant coach and the accusations against him, but is he culpable for serving as a one-man police force to discover a crime and prosecute the offender?

According to the Ohio State Athletics staff directory, there are 43 men and women on the football staff, and that doesn’t include those in the compliance and media relations departments with whom Meyer deals.

In addition to the 43 staff members Meyer manages, he is also responsible for 85 scholarship players and likely another dozen or more walk-ons.  That’s a lot of people for whom Meyer is responsible.

And if Meyer had fired Smith because of the allegations of abuse in 2009 at Florida or in 2015 in Columbus, would that have somehow brought Courtney closer to safety – or, perhaps, made Zach even more volatile and potentially violent.

By refusing to fire Zach, Meyer might have actually saved Courtney.  By remaining in daily contact with Zach, maybe Urban was doing everything he could to help.  Maybe he was being selfish.  We don’t know what is in Meyer’s heart.  Is he a great coach and good person or great coach and awful human being?  I don’t pretend to know that any more than whether Courtney was better off with Zach employed by Ohio State and Meyer – or not.

What I do know is this – coaches cannot be everywhere, and they will not always make the right choice in leading a program, regardless of the sport.  They are hired to win, operate within the rules, manage players through academic requirements, develop young men and women, recruit fine athletes who will represent the school with grace, hire and manage staff, and win.  Did I already write “win”?  I should probably write it a third time.

That’s a lot to be held accountable for.  Given the standards we demand from coaches, it’s a wonder any survive a single season.  There is no perfect coach, just as there are no perfect people.  Setting the bar at perfection ensures all will eventually fall short.

There are a few true bad eggs in college coaching, men and women who relish the opportunity to dehumanize, cruelly punish, and control completely in an effort to win at all costs.  They need to be sent packing – banned from what should be a profession rooted in education.

Whether Urban Meyer is one of those guys, time will tell.  It always does.

And given the challenges of the position, we need to be sure before we judge.