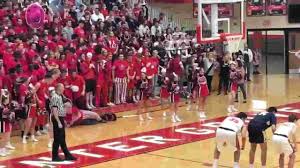 Over and over again, we say it.  Just be nice to each other.  Treat each other with respect and accommodation.  Be generous with compliments, and tolerant with weaknesses.

On Friday night at Center Grove High School, one insolent and callous young man decided cruelty was a better idea.

During a basketball game between Center Grove and Cathedral, James Franklin Jr. shot free throws while a student from Center Grove flopped onto the court and pretended to convulse.  Franklin suffers from epilepsy, and the faux seizure was meant to distract him.

In fact, a year ago, Franklin had brain surgery to alleviate the symptoms of the epilepsy.

Brave young man overcoming adversity, meet a buffoon whose joy is derived from calling attention to himself through overt mockery.

Students near the buffoon appeared to be entertained, which makes them no better than the buffoon himself.

There is plenty of shame to go around in this debacle.  School administrators did nothing to stop or condemn the behavior.  They released a statement.  Of course they did.  Administrators are always releasing statements – and not surprisingly it does not condemn the buffoon:

“Members of the administrative team and athletic department at CGHS are aware of the concerns raised about student behavior at the Cathedral basketball game Friday night. We are working collaboratively with the administrative staff and athletic department at Cathedral to address these issues. Our goal is to always create an environment where sportsmanship and quality competition can thrive. We do not condone any behavior intended to mock, disparage or humiliate any player or student.”

Great job, Center Grove.  Stellar stuff.  I hope your students embrace your lesson that admitting wrong is poor form these days.  While you don’t condone behavior intended to mock and humiliate, you don’t reprimand it either.  You don’t even acknowledge its occurrence.

The bit about working collaboratively with Cathedral is a nice touch too.  It almost seems you are assessing a shared blame in the activities of your student at your school.

There was a time when consequences were swift against students who acted against the best interests of other students.  Today at Center Grove, those actions (in the abstract) are said to be “not condoned”.  Way to educate.

Students are bombarded with words about sensitivity, but when confronted with insensitivity, clever but meaningless statements are issued.