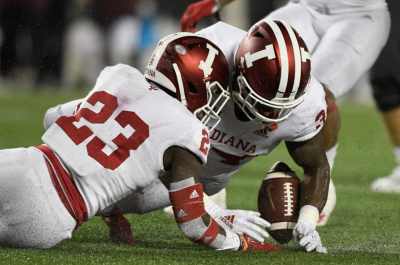 “Fumble recovered by #23! Who the hell is #23? Let me check the roster. #23 is either Jaylin Williams or Ronnie Walker Jr. Williams is a DB, so it must be him!” Watching football shouldn’t be that complicated.

Player names are returning to Indiana Football jerseys, and that is a very good thing.

For the record, at the time of the change a year ago, I was a big fan of taking names off the jerseys.  Favoring the collective over the individual is the principle lesson of football, so it made all kinds of sense to me.

My love for not having names on the jerseys eroded as I tried to figure out who the hell was doing what as I watched Indiana games at Memorial Stadium last season.  I spent most of the time between plays grilling myself on which number was worn by what player.

I was constantly looking at the roster to figure out who made a tackle, missed a block, or grabbed an interception.  Putting names to players became tedious work, and reminded me of my days in nearby Briscoe Quad where I tried to memorize names in history, literature, and economics – not a college experience for which I am nostalgic.

One additional maddening complication – the same number can be worn by two players.  Add that to the equation, and I was mentally exhausted by halftime.

Indiana has been resolute about not adding names to basketball jerseys because everyone at Assembly Hall – even those in the balcony – can tell the difference between Romeo Langford and Juwan Morgan.

The difference between watching a football and basketball game is self-evident – fans are much closer to the court than they are to the football field, and basketball players heads are not covered by identical helmets.  Easily recognizing players is one of the reasons for basketball’s popularity.

IU Athletics can indulge in maintaining a long-standing tradition of collective over personal in basketball without damaging the fan experience.  In football, it just didn’t work.

Good for Indiana reversing course after a one-year experiment that proved problematic for fans.