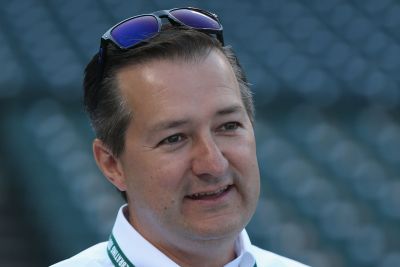 My disdain for Cubs owner and financial pirate Tom Ricketts is not going to be the reason I choose to not watch the Cubs.

My disdain for the owner of the Chicago Cubs is pretty well chronicled – and well-founded.

Tom Ricketts and his family extract as much cash as they possibly can from the wallets of fans, and I object to that level of snow-blind profiteering at the expense of people who were born into fandom for the Cubs – as I was.

Last year, the Cubs had the most expensive tickets in baseball (average cost $58.57), but the cash grab only begins there.  If you want to buy a Cubs related souvenir, the most expensive are at cubs.com.  When the baseball at Wrigley Field wasn’t particularly captivating a few years ago, the Cubs hosted movie nights inside Wrigley Field like it was some damn discount theater instead of hallowed baseball ground (now the movies are free at Gallagher Way).

The Cubs have partnered with Sinclair to form their own network (launches in 2020), which will be a huge cash cow for the family as they will reportedly charge somewhere in the neighborhood of $6/month per cable household for a product fans have received for a comparative pittance or free for 70 years.

Again and again and again the Ricketts owned Cubs have sought to monetize the love fans feel for the Cubs, and justify it by saying fielding a contending team requires massive financial resources.  One world championship in 110 years sure has filled the sails of Ricketts ego.

And all the while a straight faced and Omaha born Ricketts claims a love for the Cubs because he and his brother lived in an apartment across Addison from Wrigley for a brief period in the late-1980s.

I have nothing against a guy buying an underperforming business and turning it into a cash cow.  This is America, and making money is what a lot of people believe life is all about.  I’m a capitalist too.

I found myself watching fewer Cubs games and attending none since 2016, which just felt wrong.  Then I decided that my loathing of the Ricketts and love for the Cubs could coexist in my strangely conflicted brain.

Just because the Wrigley Family operated the Cubs as a hobby and Tribune ran the Cubs about as well as you would guess a media company would, I shouldn’t hate watching the Cubs.

This seems like a step toward sanity for me.  That Ricketts is a financial vampire is no longer a big deal to me because while he might own the Cubs as a business, I own my love for the team.

The Wrigleys and Tribune did the same thing as Ricketts – just not as well.  It’s the fans who have owned their fandom since 1876.  Our sweat and tear equity through generations of misery and a brief moment of success in 2016 has bought and paid for our standing as fans.

Eventually, Ricketts will sell, and it will be up to another family or company to screw things up in one direction or another.  Fans will continue to live and die with every pitch, as it should be.

Hell, I’ll even go to games and pay Ricketts for the privilege, but not if Addison Russell is on the Cubs payroll.  I won’t support an organization that embraces an employee who beat his wife.

But that’s a tirade for another day.