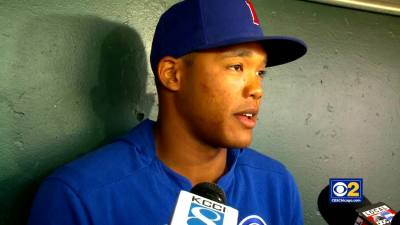 Cubs shortstop Addison Russell does not deserve a second chance.

Second chances are for those who make mistakes, and Russell did not make a mistake.  He physically and psychologically tormented two women.  Domestic violence is not a mistake – it’s a societal pox.

Again and again on social media, people excoriate those who are critical of Russell with a variety of versions of “I hope you never make a mistake.”  Domestic violence is not mine (or yours) to forgive.  Those who hit women are not welcome in my life – today, tomorrow, or ever.

And they are sure as hell not people I will pay to watch play baseball.

For as long as Russell is employed by the Cubs, I will not attend a Cubs game at Wrigley Field.  The Cubs have the highest average ticket prices in baseball.  Is it too much to ask that they field a team that doesn’t force mothers and fathers to answer questions about why Addison Russell still has a job after beating his wife?

The Cubs continued allegiance to their former starting shortstop is beyond my ability to comprehend .  To take part in his rehabilitation is laudable, and team president Theo Epstein’s work with Russell is worthy of admiration.  That’s what a friend does.  But the unintended consequences of Russell remaining a Cub should have been more closely examined and acted upon with his release.

Russell is not a good man who did a bad thing.  He is a bad man who did occasional good things.  Fans do not pay good money to watch bad men play baseball.

This story has turned good people in media and fans against one another.  Because the Cubs continue to stand by Russell, fans are forced to answer why they support violence against women, and if Cubs management doesn’t believe players will be held accountable for their friendship with Russell, they are dead wrong.

The Cubs have misjudged the level of unpleasantness this distraction has and will cause.  Their decision to leave Russell in Iowa as his suspension expired shows they are averse to being held accountable for their initial well-intentioned but hideous and foolish choice to continue to allow Russell to remain a Cub.

Maybe the Cubs come to their senses and realize that domestic violence requires a strong and unforgiving response.  Maybe through his counseling, Russell embraces a set of tactics that provide him relief from his anger so further incidents are avoided.  Maybe eager-to-forgive fans will realize that others who demand Russell become a former Cub aren’t heartless, and maybe those hard-line fans who want Russell out will understand forgivers aren’t pro-domestic violence.

We can only hope.

Whatever happens, these last six months will be remembered among the truly terrible episodes in Cubs history.