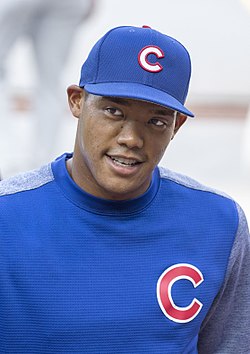 Addison Russell was booed yesterday in his return to Wrigley Field. I wouldn’t boo – I wouldn’t be there.

I love Wrigley Field and the Chicago Cubs, but not as much as I loathe domestic violence.  I have no time nor money for those who torment women physically and psychologically.  None.  Period.

Cross that line, and I am done with you.

I don’t know what else to do with my dissatisfaction for domestic violence perpetrators.  They are a pox on our society, and I will never allow them a place in my life.

When Addison Russell was recalled by the Cubs yesterday, my wallet went back into my pocket, and there it will stay until Russell is gone.  I won’t go to Wrigley Field, buy Cubs swag, or make even a tiny investment in Cubs related merch.  Done.  Adios.  Goodbye.

For those unaware of the issues that led to Russell’s suspension, click here to read about the emotional and physical abuse he inflicted upon his ex-wife.

The Cubs choice to continue to employ Russell is either a good-hearted effort to aid him in his recovery, or a refusal to part with a valuable asset who started at shortstop during their World Series run in 2016.  It’s likely a bit of both.

That decision benefits Russell at the expense of the organization and its fans, and opens the Cubs to criticism by those who see them as tolerant of an abuser, but I’m not here to judge the Cubs as an organization.

I’m simply announcing my refusal to financially support a team featuring a guy who tormented his then wife and at least one other woman, according to their own disturbing accounts.

And I’m not a fan of those who boo Russell every time he comes to the plate either.  Russell didn’t decide to employ himself.  If you loathe Russell’s actions, boo the Cubs as an organization for continuing to condone his behavior through his remaining in a Cubs uniform.  The best way to boo callous owners is by refusing to share your wealth with them.

People have to draw a line somewhere.  I’m drawing it with my wallet.

The Cubs did draw a line with a fan who flashed a racist gesture from a seat at Wrigley during a Doug Glanville segment on NBC Sports Chicago.  He has been permanently banned, and will be charged with criminal trespassing if he returns.  I love that.  I hate racism as much as violence against women.  Why the Cubs don’t ban Russell as they did the racist, I can’t explain.

Cubs fans deserve better – unless you are indifferent about domestic violence victims.  Then you are getting exactly what you deserve.