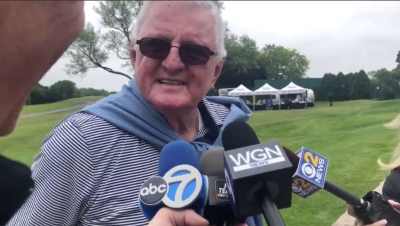 Whether he’s yelling into microphones or at clouds, Hawk Harrelson loathes the most beautiful place on Earth.

The Chicago White Sox have always played second fiddle to their crosstown rival Cubs – always.  Even during the few eras when the Sox have fielded a better team, they have been seen as a lesser organization with a lesser ballpark in an inferior part of the city.

Former Sox TV voice Hawk Harrelson has always been a bitter old crank – especially in talking about the Cubs, and he was at it again yesterday when asked about the Crosstown Classic series that resumes tonight at Wrigley Field.

“You couldn’t give me a $5,000, $10,000 bill to put another foot in that place.  I’m telling you what, that place sucks, for the visiting team,” Harrelson said yesterday when baited by reporters looking for quotes on a slow news day.

He went onto say that Wrigley is great for the fans, in part, because they can walk there from downtown, and walk downtown from Wrigley.

Harrelson then bitched specifically about how Wrigley sucks for opponents, like any team goes out of its way to make visitors feel pampered.  That perspective was built during a career in which he never visited Wrigley as a career .235 hitter for the Red Sox, A’s, Senators, and Indians.

Now I’m aware of what Harrelson is doing.  There isn’t any better way to curry favor with Sox fans than to crap on the Cubs, and Wrigley Field in particular.  Wrigley is hallowed ground, a generational touchstone for many Chicagoans, while whatever new Comiskey Park is called these days is a low rent bandbox without comparable history, amenities, or neighborhood ambience.

Harrelson is like the cranky neighbor who lives in the worst house on your block, never mows his lawn, and keeps a half dozen growling dogs in the backyard, but constantly files complaints about everyone else.  He thinks if neighbors are kept busy answering his baseless grievances, they won’t have time or energy to grouse about his place.

That would be a great tactic if anyone took seriously an old Sox fan screaming at clouds.

2 thoughts on “Jealousy of Cubs continues to drive White Sox fans love of Hawk Harrelson, who crapped on Wrigley yesterday”