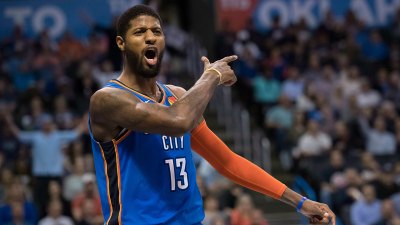 Paul George’s favorite place is always over there instead of right here.

When Paul George showed himself to be a potential all-star for the Indiana Pacers, he started showing and receiving all kinds of postgame love with opposing all-stars.  He was like the high school kid who coveted popularity and suddenly got some.

It was sad to watch George genuflect to LeBron James as though a touch from his greatness could rub off on him.  George seemed to enjoy the postgame love more than beating his rival.

He prized membership in that club of the NBA best over the team that drafted, nurtured, and developed him.

At some point, we all need to stand on our own two feet and be who we are – not the reflection we see reflected in the eyes and hearts of those we emulate.

Well, George is at it again, listening to Kawhi Leonard’s recruitment as a package deal was executed with the Los Angeles Clippers.  Leonard comes over as a free agent for four years, while George asked for a trade from Oklahoma City to join him.

And why would anyone believe he wouldn’t.  There is nothing a man who craves love wants more than to be wooed – and that is George’s MO.

The Thunder accommodated George’s request and extracted point guard Shai Gilgeous-Alexander and small forward Danilo Gallinari, as well as unprotected 2022, 2024 and 2026 first round picks, their unprotected 2021 and protected 2023 first-round picks via Miami, and the rights to swap picks with the Clippers in 2023 and 2025, league sources said.

Given that George could opt out of his contract after 2021 and Leonard’s deal runs through 2023, those first rounders in 2024 and 2026 might be very valuable to the Thunder.

This is a great deal for the Thunder, who won a total of three playoff games during George’s two years being paired with Russell Westbrook in OKC.  Now he goes to the Clippers as he approaches his 30th birthday again as a Robin – this time to Leonard’s Batman.

Experts will embrace the Clippers as an offseason winner regardless of George’s inability to win a playoff series since 2014.  Those who’ve been paying attention understand that George brings greater value as a trade piece than on the court.

The Pacers improved with George’s departure, and eventually the Thunder will too.

Everyone wins when George is dealt – including George whose insatiable appetite for love and acceptance drives his migration from team to team.

Good luck to George in LA, and good luck to Clippers fans who will soon reap great benefits when George is inevitably dealt again.