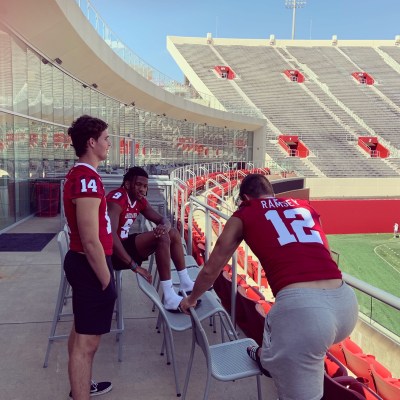 IU’s three starting quarterbacks sharing a moment before answering endless questions about which is best for the Hoosiers.

Indiana Football is the losingest football program in history among Power Five universities.  That’s where all discussions about IU football must start.  Fans who head to Bloomington on game days have become accustomed to winning tailgate parties, even if it means never setting foot in Memorial Stadium.

That has been the state of Indiana Football for a very long time – minus a beautiful respite from the mediocrity from 1987 to 1994.

Every year, fans listen to coaches, players, and others affiliated with the program talk about positive steps being taken to close the gap between themselves and teams at the top of the Big 10 East.  And most years, fans drown their sorrows at Nick’s or Kilroy’s Sports as they look forward to basketball season, where a whole new set of disappointments have awaited them the last three years.

It’s early August, and that’s time for measured optimism as IU heads into its third full season with coach Tom Allen (LEO!) at the helm.  Here are five pressing questions about IU Football which will determine whether fans might have a trip to Nashville for the Music City Bowl ahead of them:

1 – Is Tom Allen the right coach to lead IU to relevance in the Big 10 East?

In fairness to Allen, the chasm between Indiana Football and Ohio State Football (or Michigan, Michigan State, and Penn State) is measured in parsecs, not inches, feet, or miles.  There may not be a human being on Earth capable of providing the level of success Hoosier fans politely request (we never demand, right?).

Allen is a unique presence on the sideline – enthusiastic and peripatetic as he exhorts players for positive plays.  Some love it, some do not.

One positive move for Allen was to become a full-time head coach by hiring Kane Wommack as the defensive coordinator.  A head coach needs to be the CEO of the program, not a staffer, and Allen tried to be both for his first two years.  Good to see him acknowledge doing both just doesn’t work.

Maybe that change will help Allen reach his potential as a leader.

2 – Who the hell is going to be the quarterback?

For the second straight year, there is a three-way battle for the starting spot.  Two of the players in this drama are the same – Peyton Ramsey and Michael Penix.  The third is a transfer from Utah named Jack Tuttle.

Fans know what Ramsey has been for the last two seasons – a mobile safety first quarterback who wasn’t going to lose a game.  He was also a quarterback who would not win it for you.  Penix is a superior athlete with a strong arm and quick feet.  Tuttle was a highly rated pro-style QB out of San Marcos, California, who went to Utah for a season prior to transferring to IU.

Allen says he will pick a quarterback and stand by that decision.  There is an old football saying that is you have two starting quarterbacks, you don’t have any.  I’m unaware of a saying regarding three starters, although I’m sure it’s similar to that saying about two.

Penix seems to be the high risk, high reward guy, and I’m good with that.  Ramsey is a nice guy with a high floor and ceiling we’ve already seen.  Tuttle is a complete unknown to me from a physical perspective.

3 – Given the schedule, is it reasonable to even hope for bowl eligibility?

Indiana has four games it must win to keep bowl hopes alive, and all come in the first six games of the season.  Without a win against Ball State at Lucas Oil Stadium, and home wins against Eastern Illinois, UConn, and Rutgers, a bowl is out of the question.

There is an interesting home game September 14th at Memorial Stadium against Ohio State.  This is Ryan Day’s first season as Ohio State’s head coach after succeeding Urban Meyer, and maybe he’s going to still be a little wobbly at that point.  Indiana hasn’t beaten Ohio State since Joe Staysniak was a tackle for the Buckeyes (1988), so imagining a world where a Hoosiers upset is possible is a little like hoping weekends will last for five days.  IU also plays Michigan and Northwestern at home and are not expected to win either game.

The road slate offers a little hope – at least against Maryland.  Michigan State, Nebraska, Penn State, and Purdue with also host the Hoosiers.  Winning just one of those road games would be a good result for IU.

Three non-conference wins plus a win over Rutgers equals four.  One road win takes IU to five, which means they either need another road win, or have to beat Ohio State, Michigan, or Northwestern in Bloomington.

Oof!  Possible, but it sure looks like a tough putt.

4 – Can Stevie Scott take a step forward in his sophomore season?

Scott averaged almost 100 yards per game in his freshman season as he set records for true freshmen in yards, TDs, attempts, and 100-yard games.  His productivity will take pressure off a passing offense that is currently without a quarterback – or with two too many quarterbacks.

If Scott can ground and pound behind the veteran offensive line and match the five-yards per attempt he managed as a freshman, that makes everything else go for the Hoosiers.

5 – Will beer sales inside Memorial Stadium prompt more people to leave the tailgates?

OK, this has no bearing upon whether IU wins a magical sixth game this season, but it’s going to be interesting to follow.  IU is a little late to this party by finally admitting fans drink beer and other intoxicants prior to games, and if games are going to last four hours, either those fans are going to be allowed to grab a beer inside the stadium, they will leave the stadium to get more beer, they will sneak beers into the stadium, or they will take naps in the fourth quarter.  Indiana has decided to provide fans with the first option.

Interesting fast fact about Indiana Football that should provide a smile – IU is 33-24-3 against SEC teams.  If we exclude games against Kentucky, in which IU has an 18-17 all-time advantage, IU’s record against the SEC improves to 15-7-3!