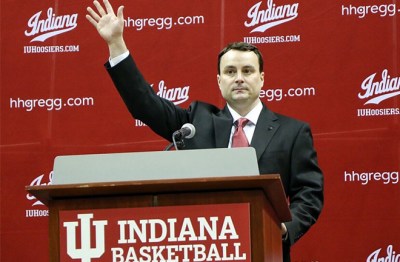 ” “How many Indiana kids want to play at IU? Let’s see some hands!”

What’s so special about basketball players from Indiana?”

“Do you really think basketball is different inside Indiana’s borders?”

“Why should Indiana University value a kid from Indiana over an identical kid from New York or Texas?”

If you are from Indiana, you would be surprised how often I’m asked these questions.  If you aren’t from Indiana, you might be a person who’s asked them.  When I talk about how pleased I am that IU’s Archie Miller and his staff are working hard to recruit their home state, people either get it or they don’t.

They say times have changed – the candy stripes don’t mean anything.  I agree that garment colors and designs are valueless to recruits, and that players want more from their experience at IU than wearing funny pants in from of 17,000 people at Assembly Hall as cheerleaders run in a figure-eight carrying flags as the pep band plays the William Tell Overture.

I get what recruits want – a path to the NBA and a chance to win championships.  I also understand some things about basketball in Indiana that gives a program a significant advantage when they are able to gather players from this state in bulk.

There are plenty of reasons for this:

If Leal commits to Indiana Friday, that will give Miller two native Hoosiers so far in his 2020 class.  The 2019 class included Trayce Jackson-Davis, Armaan Franklin, and grad-transfer Joey Brunk – all from Indiana.  In 2018, Miller netted Langford, Rob Phinisee, and Damezi Anderson from Indiana, Jerome Hunter from Ohio, Jake Forrester from Pennsylvania, and grad transfer Evan Fitzner from California.  Forrester transferred a few months ago and Fitzner exhausted his eligibility, leaving Miller with a bunch of Indiana kids, and one from a neighboring state.

I have no problem with Miller recruiting Illinois and Ohio once the brand of Indiana Basketball is re-established as nationally meaningful, but right now the buzz about IU is strongest within the borders.

With a Leal commitment, followed by Kristian Lander, Caleb Furst, and Trey Kaufman in the class of 2021, Indiana the program has a chance to reflect the basketball excellence of Indiana the state.