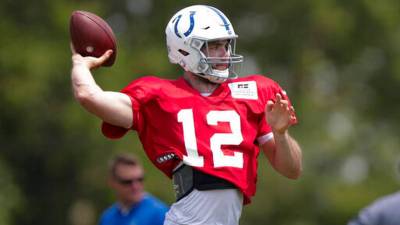 What we saw at Colts practice today was pretty good, but what we didn’t see – again – was troubling.

There are a lot of good-looking and explosive Indianapolis Colts players continuing to prepare at Grand Park for the 2019 regular season opener, but unless Andrew Luck’s calf gets back to 100% within the next 27 days, it won’t matter much.

It’s hard to recall the number of consecutive training camps where Luck’s health has has a gnawing issue, but it’s driving fans, media, and coaches nuts – again.

When Frank Reich spoke to the media today about Luck, he confirmed that Luck would not practice against the Browns Wednesday or Thursday – which means he won’t play Saturday in the second preseason game.  That takes us to August 19th at the earliest for Luck to get live practice reps.  That is 20 days before the regular season begins in Los Angeles.

Back-up Jacoby Brissett is a nice guy and good quarterback, but the ceiling for the Colts will be entirely determined by Luck’s ability to play at 100%.  With Luck, the Colts have the potential to win a Super Bowl.  Without him, all the brilliant late round draft picks by Chris Ballard won’t be able to help Brissett win enough games to make the playoffs.

Safety Khari Willis has looked much better than a fourth round pick in practice and during the preseason opener in Buffalo, and cornerback Rock Ya-Sin had another sweet pick in today’s practice.

Daurice Fountain and Deon Cain have been playmakers no matter who plays quarterback in 11-on-11 or seven-on-seven work.  They’re playing so well that people are starting to ask whether the always good, but never great Chester Rogers is a lock to make the roster.

But it may not make any difference.

Defensive lineman Denico Autry has been as good as any Colts player in training camp, and cornerback Quincy Wilson appears to be rolling toward reaching his tremendous potential.

But it just doesn’t matter if Luck can’t get his calf back to 100%.

And what the hell is going on with this balky calf anyway?  We all want to know what the future holds for Luck, and at this point we are not entirely sure whether we are being told the truth about the injury and its prognosis.

We want answers, but injuries are tough beasts to predict.  Last summer, we had no idea whether Luck’s shoulder would allow him to play again – ever.  But Luck had no idea himself.  Neither did Reich or Ballard.

If we are talking about whether Brissett or Chad Kelly are a better back-up (potential starter if Luck cannot go) next week, this season where all is possible could evolve into one where mediocrity is all but assured.