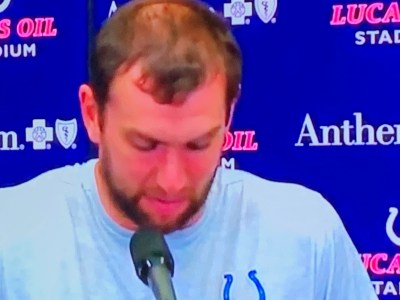 Some fans were angry as dreams of a potential championship season disappeared with his decision.  Others reflected on Luck’s desire to live his life without the constant pain he’s endured for years.

Allowing yourself to be relentlessly pummeled by behemoths in the name of competition and entertainment is a personal choice, and Luck has decided he doesn’t need to risk his health because a city wants to see another meaningful banner hung at Lucas Oil Stadium.

Luck has always been a reluctant face of the Colts.  Being a quarterback selected first overall comes with expectations and fame, and Luck is not a happily famous guy, even in Indy – a town that allows sports stars to exist in an environment as close to normal as any on the planet.

Standing next to him at his locker during weekly media availabilities for the last five years, I never got the sense he enjoyed a single moment of those polite interrogations.  He tolerated the media as a responsibility, but never engaged with the interlopers who trespassed in his locker room and life.

Luck appeared to love the brotherhood driven by collective sacrifice that defines football.  He reveled in the games as an intellectual and physical test of preparation and will.  He seemed to dislike everything else.

The scales used to evaluate the worth and virtue of an endeavor versus the sacrifice finally tipped solidly toward the negative, so Luck decided to walk away.

And people reacted immediately and revealingly.

Angry fans view Luck as nothing more than a quarterback who could have led their favorite team to a championship.  Minus his position as QB of their beloved Colts, they have no use for him.  In their anger of what they perceive as a betrayal, those fans booed Luck last night at Lucas Oil Stadium.

Those who wish Andrew the best, view him through a more humane prism – as a husband, father-to-be, and man who made a personal decision to leave a public and painful career in favor of a different challenge.

Neither is right or wrong.  They just view the world and football in different ways.

Luck isn’t right or wrong either.  He made a decision, slept on it several times, and felt good enough about it pull the trigger on his exit.

The question for fans becomes – what kind of a season is Jacoby Brissett capable of authoring?  Those who respect Luck for his decision will ask what’s next for this uniquely gifted man.  And Luck will need to find a vocation to fill his days and quench his need to compete.

Last night’s announcement held a mirror to each of us.  We are comfortable with what we see in ourselves, but disturbed by how some others behave.

And Luck woke up this morning for the first time in years without embracing the challenges or dreading the sacrifices of being a quarterback.

One thought on “Andrew Luck’s retirement prompts anger in some, respect from others, and provides solace for him #Colts”