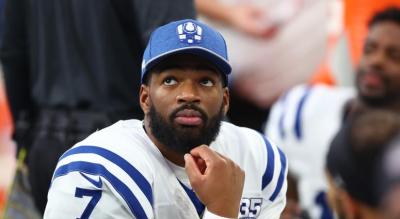 The new face of the franchise needs to live up to Frank Reich’s opinion of him.

10 – Kemoko Turay gets 10 sacks.  Turay is an elite athlete whose been training with former sack master Robert Mathis, and needs to be the same kind of presence in opposing backfields.  Sacks lead to punts, and pressures leads to picks.  Turay needs to establish himself as a game-wrecker on a defensive line that should cause problems for opposing QBs.

9 – Chad Kelly stays out of trouble.  “Million dollar arm and 10-cent brain” is a quote used to describe guys with elite level talent, but a penchant for living a way-too-active life off the field.  That has fit Kelly to this point in his football life.  Trouble at Clemson and with the Broncos, and great success at Ole Miss has given teams reasons to both love and fear Kelly.  There is no question Kelly can be an excellent backup for Jacoby Brissett if he remains focused.

8 – E.J. Speed is as disruptive in the regular season as he was in the preseason.  There was one constant in the Colts four preseason performances – E.J. Speed.  He either made the tackle or was at the point of the tackle virtually every single play.  No one got more reps for the Colts, and no one made more of the opportunity.  If he can be that effective in the regular season, he and Darius Leonard will make it tough for another Colt to make tackles.

7 – Adam Vinatieri makes 90% of his field goal attempts.  Father Time declares the end of our athletic lives for all of us at some point, and that day is coming for for the future hall of famer, but it can’t come in 2019 if the Colts are going to steal a couple of games with his foot.  The Colts are unlikely to dominate many opponents, which means a Vinatieri kick might be the difference in three or four games.  If you don’t believe me, ask the Chicago Bears how important a made kick can be?

6 – Parris Campbell catches 70 balls.  With T.Y. Hilton as a deep threat, there should be chances to complete balls to Campbell underneath.  With the speed and elusiveness to run away from defenders, Campbell is a game breaking weapon.  He’s also a guy who will draw attention from Hilton – giving him additional chances to get chunk yards.

5 – Left side of the offensive line starts 16 games.  Nothing is as important in the NFL than health, and the consistent health of the Colts offensive line was one of the primary reasons Andrew Luck was sacked only 18 times last year.  The Colts certainly don’t hope that RT Braden Smith or RG Mark Glowinski get hurt, but if someone on the line has to sit in the tub for a couple of weeks, the Colts hope it’s not LT Anthony Castonzo, LG Quenton Nelson, or center Ryan Kelly.  Protect Brissett’s blindside – go to the playoffs.

4 – Malik Hooker grabs five picks.  Healthy for the first time in his Colts career, the moment has come for the free safety to live up to his draft position (#15 overall in the 2017 draft).  Scouts said Hooker was capable of changing the game with his athleticism when he came out of Ohio State.  He needs to do that.  Colts need to win the turnover battle, and Hooker needs to be a part of that effort.

3 – Ben Banogu, Bobby Okereke, or Rock Ya-Sin go to the Pro Bowl.  The Colts were the first team since the 1965 Chicago Bears to have two rookies named to the NFL’s All-Pro team.  It’s greedy to hope for that kind of excellence from the 2019 rookie class, but if one of them can go to the Pro Bowl, that means that another extraordinary and young piece of the puzzle has been added to a roster in need of some elite talent with the departure of Luck.

2 – Marlon Mack starts all 16 games.  The one position where the Colts lack depth is in the offensive backfield.  Beneath Mack, the Colts don’t have a runner who defenses need to worry about.  The other backs are serviceable, but none have the explosiveness of Mack.  Starting 16 games gives Mack a chance to total a minimum of 1,200 yards.

1 – Jacoby Brissett will be as good as Reich has insisted he is.  Sometimes, Reich says things we know he doesn’t 100% believe, but on the many occasions he has said “Jacoby is one of the best 20 quarterbacks in the NFL,” Reich sold it with passion.  For those in national media who insist upon citing 2017 stats to show Brissett as a middling back-up, their logic is based upon flawed evidence.

Here are four critical components to remember when projecting Brissett as a bust based upon 2017:

Can the Colts check all these boxes?  That’s why we watch.