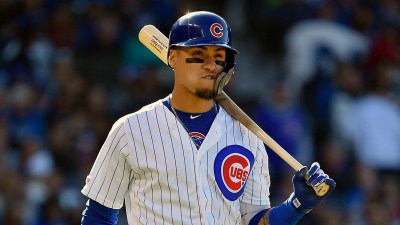 This is the way we want to see Javy Baez – fully clothed.

Seeing Cubs shortstop Javy Baez naked is not something I ever wanted.  ESPN made him hard to miss in its latest Body Gallery.

It’s as though ESPN wants to penalize guys for looking at a few athletic women who are naked.  A few years ago, they put an unclothed 75-year old pro golfer Gary Player on the cover of its now defunct magazine as a tax on those who picked up a copy for something other than admiring the physiology of world class athletes.

Baez is a fun and energetic baseball player who is among my favorites in the game, but I have no use for him out of his uniform.  His home runs and lightning fast tags are thrilling.  Javy in his all-together is another issue entirely.

Avoiding nude men used to be as easy as never picking up a Playgirl Magazine and avoiding Richard Gere movies.  It evolved to where I learned to shun all issues of ESPN – The Magazine for fear of getting a face full of of an old golfer.  Not being surrounded by elderly naked golfers used to be easily accomplished by changing my shirt and spikes in the car rather than using the country club locker room.

Now, naked guys of all ages are all over a sports themed website, where it’s one wrong click and you get a face full of Javy!

ESPN needs to limit my disappointments in seeing Baez to his strikeouts on low and away sliders with men on base.