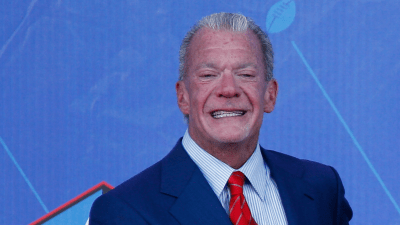 Underestimate Jim Irsay as an owner of the Colts or businessman at your own peril.

It’s possible Jim Irsay refused a $3.2 billion offer to sell his Indianapolis Colts, as the Colts told the Indianapolis Star.  It’s also possible Irsay was not thrilled with yesterday’s Forbes valuation of his team at $2.65 billion, which ranked the Colts as the 20th most valuable in the NFL.

It’s hard to imagine an Irsay not owning and operating the Colts.  His father Bob acquired the team in 1972 in exchange for the Los Angeles Rams, which he purchased for $19 million.  Bob moved the Colts to Indy in 1984, passed away in 1997, and Jim (as Bob’s only heir) has owned the team since.

As is the case with most billionaires, Irsay is a nonconformist.  His business acumen is sometimes questioned because of his purchases of iconic cultural memorabilia, but I think he has been damn smart.  Acquiring one-of-a-kind artifacts like Jack Kerouac’s “On the Road” scrolls, Ringo Starr’s drum kit from his days with The Beatles, and a variety of historically critical guitars and pianos allows him to set the price for re-sale.

Those pieces will only fall in value if Irsay decides they should (and he won’t).  Until he sells, they will look great in his den – or wherever he chooses to display them.

Many think Irsay is a bizarre collector – like the Willy Wonka of rock ‘n’ roll souvenirs.  I think he is a wildly underrated investor and businessman.

Forbes can do all the calculations it likes in determining the value of the Colts, but only one number matters – the amount Irsay would accept for the franchise that will celebrate a half century of Irsay ownership in 2022.

Irsay either decided that $3.2 billion was not the right price when someone offered it, or that it’s  where the bidding starts for those who want to buy.  Maybe Irsay decided that he couldn’t take another change in generational quarterbacks.  Luck can’t take the pain and darkness of rehab, and Irsay can’t handle rebuilding.  Who knows?

One thing we do know, Irsay is a very wealthy man, and he will be wealthier again tomorrow and for all the tomorrows as long as he careens through this life.