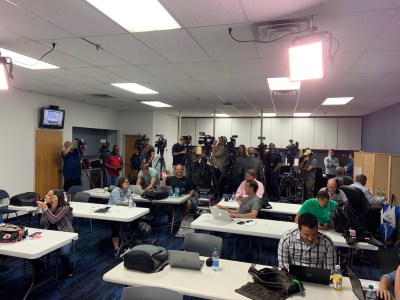 Colts media know the questions about the team they cover, and that answers won’t come until Sunday in LA.

“Are the Colts trying to speak this into reality?” was asked by a cynical and suspicious member of the band of brothers who cover the team.  All agreed they are.

What are the Colts trying to speak into reality?  That Jacoby Brissett is ready to assume the role as starting quarterback for a Colts team that was thought to be a super bowl contender until Andrew Luck’s sudden (sort of) retirement.

Players and coaches are unanimous in their support for Brissett and belief that the franchise does not need to take a step back because Luck and his versatile array of weaponry are gone.  Media are more skeptical – and correctly so.  They should be.  The media should respond to what it sees – not what it hopes for.

That attitude exists in stark contrast to media types in Chicago who have been united in their chorus of positivity about the Bears.  “This defense is better than the ’85 Bears!”  “Trubisky is ready to emerge among the NFL’s elite!”  “These Bears aren’t just ready to win the division – we, er, they are ready to win a super bowl!”  I’ve heard all those things listening to Chicago sports talk and TV over the past week.

They fully expected a coronation last night until the game against the Packers was finally played last night at Soldier Field.  That game exposed the Bears as flawed, and educated the Chicago media about waiting until the game is played to crown a winner.

Colts media don’t need to learn that lesson.  They are wary – fair, but wary.

There are serious questions about the Colts roster that don’t begin and end with Brissett’s ability to respond to the pressure of carrying a team.  Among them:

These and other questions will be answered beginning Sunday.  No one in Colts media knows the answers or pretends to know the answers 48 hours before the game against the Chargers is played.

That is what separates this media group from its contemporaries in the Windy City.

Let’s hope the Colts are as different from the Bears as the two media contingents are.