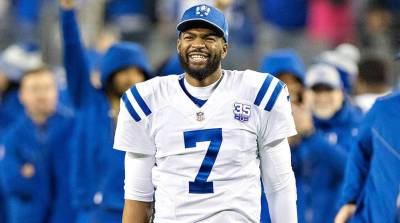 Dear national media – This is Jacoby Brissett, and he is going to lead the Colts to the AFC South crown.

The Indianapolis Colts are going to win the AFC South if they beat the Houston Texans on October 20th at Lucas Oil Stadium.

Sure, there are some other things that need to happen, like the Texans losing to the Chiefs at Arrowhead Stadium this Sunday and the offensive line staying healthy, but if the Colts beat the Texans the path is clear to a division crown.

Part of the reason the Colts can be crowned in October is that the remaining schedule is filled with bottom feeders like the Broncos, Steelers, Dolphins, Titans, Bucs, and Panthers.  The Saints are the only remaining Colts opponent ranked in the NFL’s top 12, according to the utterly meaningless power rankings published as eye candy by ESPN.

I realize I’m arguing with myself here by citing power rankings as evidence while simultaneously acknowledging their uselessness, but this is a bye week and we indulge in speculative drivel during the bye week.

National wonks continue to view the Colts through the prism of who they are not rather than who they are.  Andrew Luck’s retirement remains the defining factor for NFL media outside Indy.  Smart people here understood the Colts had two first team All-Pros last season, and Luck wasn’t among them.  The Colts locker room is defined by who still works there – not by who packed a bag 15 days before the season started.

While Jacoby Brissett is likely to never be ranked among the league’s top five quarterbacks, his skill set and personality fits this team nicely.  The Colts are built to run the football and the defense is developing its personality as a ball hawks.  Brissett needs to avoid plays that lose games more than he will be relied upon to win them.

Brissett will likely never get the respect he deserves because there is nothing sexy about him.  He’s not fast like Lamar Jackson, nor does he date hotties like Aaron Rogers.  His fingers are not adorned with six championship rings like Tom Brady.  He’s not a great quote, and because  Jacoby reps himself, super agent Drew Rosenhaus isn’t busy raising his brand value with ESPN appearances.

The Colts are a lunch pail, blue collar, team-first group that plays for one another and believes in coach Frank Reich’s mantra of working to get 1% better each day.

I know that sounds like rah-rah nonsense.  Talking about NFL players/businessmen as though they are collegians is silly.  Maybe it’s that 33 of the guys on the 53 man roster are less that three years removed from their college days that allows the Colts to attack their work with youthful exuberance.

After fighting through adversity last year to turn a 1-5 start into a 10-6 season, the Colts have found a way to get off to the kind of start that can turn a second half roll into a first round bye and home field advantage.

Maybe I’m putting the cart before the horseshoe, but this season sets up very nicely for a team that is being dismissed as irrelevant by the national experts.