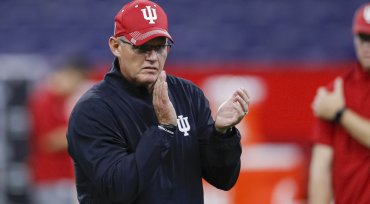 Tom Allen claps a lot, cheers a lot, and might just be about to win a lot.

For those IU grads who had trouble getting through M-014 (a non-credit basic math course), that leaves the Hoosiers one win shy of bowl eligibility.

With games remaining against Nebraska, Northwestern and Purdue – games Indiana has at least a 52.3% chance of winning, according to ESPNs Matchup Predictor – it seems reasonable to expect the Hoosiers to go bowling.

Going to a bowl is base level achievement for most Power Five football programs, but at IU it’s progress.  Real progress.

For those who are cynical about IU Football, and who can blame the cynics after 24 straight seasons with six or more losses, this year might bring the kind of success that requires a recalibration toward optimism.

Indiana still has to win that elusive sixth game, but they look like a team with a good chance to surpass expectations (8-4 could happen).

Quarterback Michael Penix will bounce back from his mild concussion and if he doesn’t get in another fender bender, he should be ready to lead what has been a very productive offense as long as it’s not facing Ohio State.

No one saw IU as a team that could score virtually at will, but here they are scoring at least 31 points against six of seven opponents.

It’s very close to the time for IU fans who have been justifiably dubious of Tom Allen as a head coach to admit that Fred Glass might have been right when he quickly handed him the reins of the program after Kevin Wilson was fired.

I was one of those guys.

Allen’s oddly euphoric behavior of the sidelines bothers people who prefer coaches to focus on what’s coming rather than celebrating what has been.  And he might be a bigger fan of clapping than former hoops coach Tom Crean.

Aesthetics aside, it appears Indiana is on the precipice of a level of success it hasn’t enjoyed in a quarter century.

Before admitting I was wrong, I’ll wait until the Hoosiers win six, but there is reason to feel good about Indiana Football, which is something I don’t believe I’ve ever written.