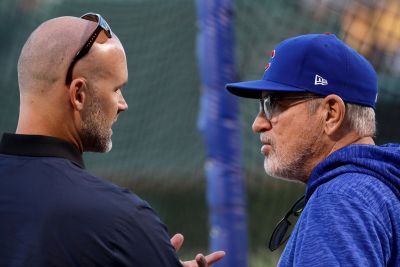 The torch being passed from Maddon to Ross makes perfect sense. It will be up to Ross to validate it.

The Chicago Cubs have just completed their most successful five-year regular season run in 80 years which included their first World Championship since 1908.

In 2019, the Cubs continued their backslide from the glorious heights of 2016 by failing to reach the postseason for the first time since 2014.  Joe Maddon lost his job because that fall from grace was due to a lack of adherence to baseball fundamentals.  Maddon was seen as a hands-off skipper, and the Cubs stopped responding to his motivational gimmicks.

As the search for Maddon’s successor progressed, two factions formed – those who wanted a new voice from the outside to serve as a catalyst toward a new way of thinking and playing, and those who favored former Cubs catcher David Ross.

For many, Ross represents the Cubs trying to cling to the glory days of 2016.  For others, Ross is the guy who ran the 2016 clubhouse and brought accountability to those who neglected to run out ground balls, hit the cutoff man, or run the bases with prudent aggression.

The slide toward sloppy baseball began with the 2017 season, the first without Ross as the guy who could turn red-assed with teammates who indulged in mental lapses.

Many in the media hoped the Cubs would try to take the next step by stepping out to hire Astros bench coach Joe Espada.  He embodied the hope for the fresh voice, but most couldn’t have pointed him out in a lineup.

Ross is seen as the status quo.

The Cubs made their choice to hire Ross, and many are critical.  They see it as obvious, underwhelming, and even weak.

It’s not weak, but I understand why Cubs fans and media believe it is.  Bad habits are hard to break.  They have never learned how successful teams operate because the Cubs were never successful.

For those who still believe the Cubs should have hired someone other that Ross, let me explain why you are wrong.

Why would Cubs president Theo Epstein try to reinvent the wheel with this hire?  Ross has been a part of the Cubs front office since his retirement, knows many of the players from their days as teammates, and is quite familiar with the reasons the Cubs failed to qualify for the playoffs this season.

The Cubs need to be confident in what they are.  The culture that has been built has been successful during four of the last five seasons.  Throwing it out the window to pacify fans and media who have been conditioned to demand change every three or four years as the team sputtered would be idiotic.

Consistent culture is what allows programs, teams, and franchises to maintain their competitive position.  Staying within the family is how cultures are maintained.  A voice within the organization can still be a fresh voice.

Think of the St. Louis Cardinals as they shifted from Tony LaRussa to Mike Matheny.  The Cards made the playoffs during each of his first four seasons, and his era lasted as long or longer than any Cubs manager since Frank Chance (1905-1912).   In central Indiana, think Butler Basketball over the last 20 years – Collier to Matta to Lickliter to Stevens to Holtmann to Jordan.

If the Cubs won 66 games last year, replating would make sense.  Temporary regression from bad to worse is not only tolerable, it’s prudent.  Cratering requires boldness that might take years to flower.  The Cubs did that when Epstein took over the Cubs baseball operation.

There is no reason for the Cubs to crater again.

Cubs fans and media need to understand that a steady hand is needed to bring sustained success.  The torch being passed from Maddon to Ross represents precisely the stability required to keep tides high.

That Ross was the obvious choice doesn’t mean he isn’t the right choice.