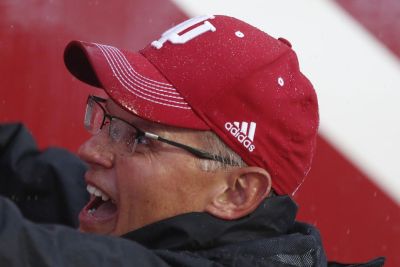 My evaluation of Tom Allen as Indiana’s football coach has been proven wrong by the 6-2 record the Hoosiers have put together this season.  There is still work to be done, but 6-2 gives the Hoosiers bowl eligibility before Halloween for the first time since 1993.

If Indiana can beat Northwestern and Purdue – two games they are projected to win, that would guarantee their first season without a sixth loss since 1994.

When Allen was elevated to the head coach position immediately following Kevin Wilson’s removal, I saw Allen as a strange choice.  His only experience as a head coach was at Ben Davis High School, and his penchant for enthusiastic celebrations throughout a game belied a mind locked into what had been instead of what’s coming.

In my world, grumpy coaches never satisfied with what had just happened are more likely to succeed (think Belichick, Saban, Knight, Meyer and Krzyzewski).  I’m not sure I’ve ever seen those five coaches smile, much less jump up and down thrusting their fists in the air.

Allen also admits to being intimidated by media, which is bizarre if you know people in sports media.  They are a lot of things, and intimidating is not among them.

I thought Allen would be the latest in a long line of failed experiments in leadership for college football’s losingest program.

I apologize to Allen, who is clearly a better coach and leader than I believed.  I apologize to Fred Glass, who I thought had taken leave of his senses when he said before this season that the next major athletic investment would be an extension for Allen.  I thought at the time Fred was living in hope and about to die in desperation.

I apologize to Peyton Ramsey, who was 27-40 for 351 yards at Nebraska in leading the Hoosiers to the bowl guaranteeing win.  My thoughts about Ramsey as a Big 10 starter were not generous.  While it’s true Ramsey doesn’t have a fastball, he is proving it’s possible to win without one.

Indiana is on the precipice of doing many good things undergrad students on the Bloomington campus have never seen or lived through.  If they win nine games, they will have done something alums under 60 can’t recall.

Cynicism toward Indiana Football has been rewarded since the early 1990s, and so it was easy to fall prey to the demons that filled IU fans with doubt and dread as they looked toward the last five games of the season.  But the win against Nebraska showed Allen and the Hoosiers as a legit Big 10 team for the first time in a generation.

My negative assessment of Allen’s celebrations and “Love Each Other” mantra was clearly flawed.  There’s more to him than LEO and jumping up and down like a madman who just won Powerball.  He can coach because if he couldn’t, Indiana wouldn’t be 6-2.

Indiana is what its record says it is – a bowl team.  Allen is a coach leading IU to a bowl for the fourth time since 1993.  Glass is the guy who saw something in Allen that most of us missed.

There could be more – much more – to come.