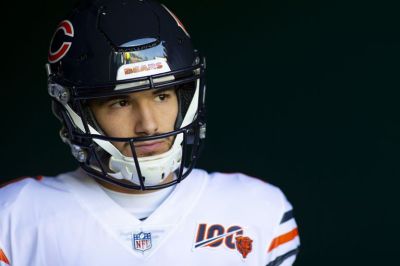 If Mitch Trubisky wants to lurk in the shadows, maybe being the Bears quarterback is not for him.

Members of the 1985 Bears would not have gathered around a TV quivering about what Dave Kaplan, Mike Greenberg, David Haugh and Hub Arkush might say.  They were too busy trying to kick the hell out of opponents and win a Super Bowl.

Chicago Bears quarterback Mitch Trubisky watches, listens, and is not kicking the hell out of anyone but himself. And he wants the TVs at Halas Hall turned off so he and his teammates aren’t distracted by media negativity.

People in the media are mostly decent folks who try to engage the passion of fans with their insights or hot takes.  Some know quite a bit about the sports they cover.  Some don’t know a damn thing.  None are worth the time and attention of those who actually play or coach.

Most understand that.  They correctly dismiss the media as lightly informed twits.  Not Trubisky:

“Trying to get some of these TVs in the building turned off because you’ve got too many people talking on TV about us and what they think about us – what we should do, what we are and what we’re not.  But they don’t really know who we are, or what we’re capable of as people, or what we’re going through, or what we’re thinking. It’s just the outside viewers looking in.”

Hard to argue with the content of Trubisky’s message, but that he feels the explain it to the media provides additional ammunition to those who believe the Bears need to move on to yet another starting QB.  Confident people just don’t talk to the media that way.  Hell, they don’t think that way in their most private moments.

Sports media types don’t always understand the games they cover, but they can smell a weak and prickly Bear all the way from Waukegan.  Trubisky’s comments reek of weakness – to the media and his teammates.

This isn’t all Trubisky’s fault.

Not only did the Bears draft Trubisky #2 overall in the 2017 draft, they swapped a third and fourth round pick to move up a single spot to guarantee they would get him.  That move brought expectations Trubisky cannot fulfill.  Trubisky didn’t do that to himself.

Bears GM Ryan Pace made that deal and chose Trubisky over superior QBs Patrick Mahomes and Deshaun Watson, who went #10 and #12 respectively.  Never mind that potential MVP Christian McCaffrey was selected eighth by the Carolina Panthers.

The Bears could have Mahomes, Watson, or McCaffrey, and would also have the players they could have selected in the third and fourth round if Pace had not dealt them to move up.

That doesn’t absolve Trubisky for babbling like a scared six-year old about TVs and the mean ol’ media that he wants to avoid, but blame for his hypersensitivity should be shared.

if Trubisky was completely transparent, he would have said, “I’m a hypersensitive and easily distracted person incapable of leading a team or functioning well under a spotlight.  That disqualifies me as a NFL quarterback, especially in the city of Butkus, Jordan, Magnuson, Maddux, Santo, and Singletary.  I’m going home until people promise to be nicer to me”

Some guys are just not meant to lead.  Chicagoans are angry Trubisky isn’t capable and confident.

They should be pissed off because it’s also true about Pace.