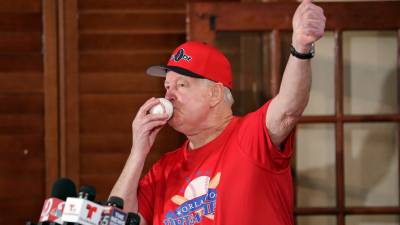 Pat Williams is the only man on Earth who could get anyone to take seriously the idea of a third MLB franchise coming to Florida.

Pat Williams is a dreamer, and his latest dream is well named.

Over his more than half century as a fearless sports executive, Williams has achieved great success with both good and bad ideas – because his boundless energy turns all ideas into winners.

His latest idea might be his nuttiest, but bet against Williams at your own risk.

Williams was the founding manager of the NBA’s Orlando Magic, has adopted 14 kids, and written more than 100 books.  In Williams life, no minute is wasted and no opportunity unexplored.  At the age of 79, his energy is still boundless.  He’s going to need every bit of that life force as he tries to bring Major League Baseball to his adopted hometown of Orlando, Florida.

You’re thinking – “Hey, doesn’t Florida already have two teams that can’t draw flies to a picnic?”  That’s right.  The Miami Marlins and Tampa Bay Rays were the two franchises at the very bottom in MLB attendance in 2019.  In fact, if the Marlins and Rays attendance was combined, it would still be under two-million and rank 19th among the 30 teams.

Given those numbers, how does it make any sense for Florida to be awarded a third team?  It doesn’t.  But that has never stopped Williams, who has spent a career applying Bill Veeck’s unique life philosophies to achieve massive success.  Williams speaks the nearly impossible into reality every day.

If it was anyone other than Williams trying to bring a major league team to Orlando, I would rate the probability of it actually happening at zero – and I sure wouldn’t spend any time writing about it.

The Orlando Dreamers is illogical on all levels.  All the factors that help baseball teams develop a generational fanbase are absent in Orlando – except for Williams as the guy saying it should happen.

If you have ever spent time with Williams, you get it.  He’s a force of nature who never passes up an opportunity to make a connection or tell an inspiring story.  During every conversation I’ve had with Williams, I’ve thought he was capable of anything and wanted to be a part of even a small part of his journey.  This crusade to bring an MLB franchise to Orlando will test his ability to do the impossible.

Don’t underestimate the possibility of the Orlando Dreamers joining the Chicago Cubs, New York Yankees, Miami Marlins and the other 27 teams.

If it happens, there will be only one reason, and that is Pat Williams doing what he’s always done – use his energy and creativity to sell a dream to a group charmed by his overwhelming spirit.