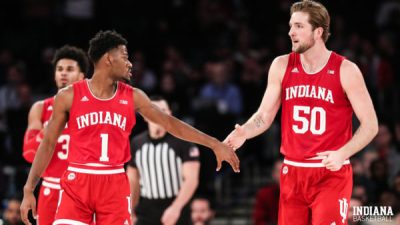 Joey Brunk played great for 1:48 during the second half, but needs to improve if IU is going to reach its potential.

Indiana needs to get better, and use last night’s win against UConn as a springboard to better basketball, or this season could spin in the same wrong direction as the last three.

The Hoosiers beat the Huskies 57-54 last night in one of the least aesthetically appealing basketball games in this young season.  The Hoosiers found a way to win despite hitting only 36.8% of their shots, not a having a single double-digit scorer, and scoring only four points during the first 11:54 of the second half.

UConn made more mistakes and bad basketball decisions than IU, and that provided the difference.  In some games, it’s a shame that either team loses.  In others, a case can be made that both teams should have lost.  Indiana won last night despite playing horrific stretches of basketball only because UConn was worse longer.

Here are three issues that caused Indiana problems last night and will cost them wins if they are not corrected:

Bad angles entering the post – There were at least four vertical entry passes made by Hoosiers during last night’s game that resulted in turnovers.  Grade school children in Indiana are taught about correct angles for entering the post.  Vertical passes (parallel to the sideline) are easily picked off by defenders.

Defending out of bounds underneath sets – Indiana has routine difficulty defending out of bounds plays underneath the opponent’s basket.  Variations of screen the screener allow easy baskets against Indiana, and it drives fans crazy.  I’m sure it drives coach Archie Miller nuts too.  IU got it right once late in the game, but can’t continue to hand opponents layups if they are going to beat well-coached Big 10 teams.

Closing out on shooters – This is a skill Indiana does not perform with consistent energy.  As IU helps to close down drivers, opponents kick the ball to shooters camping outside the three-point arc.  Without quick and controlled closing, offensive opportunities abound.

The bad news is that Indiana players seem incapable of correcting these fundamental issues.  It’s been many years since IU could be counted on to deliver consistent effort and execution. The good news is that they are 9-1 despite frequent lapses.  It helped that Miller built the early portion of the schedule to gift IU seven wins, but beating Florida State in Bloomington and UConn in New York in an unofficial road game are real wins.

Indiana fans are well known for focusing upon mistakes rather than praising positives, and I’m a big proponent of that  Turnovers are a pox, bad shots are unacceptable, defensive lapses show a lack of understanding, and a player not busting his ass back on defense because of an offensive miscue lights up Twitter like a Christmas tree.

Basketball for IU partisans is about a pursuit of excellence that yields outstanding results.  It’s not all wins and losses, but wins and losses as a reflection of development toward potential.  The positive evolution needs to be obvious.  It did not exist in a meaningful way under Tom Crean.  Basketball to Crean is not taught; it is choreographed – as it is for for many coaches.

Last night’s win was not a reflection of Indiana’s development and excellence, but of being slightly less bad than UConn.  The Hoosiers did enough wrong to lose to almost any good team, but UConn fouled and turned the ball over so often that IU scored three more points.

There is no need for anyone associated with IU Basketball to apologize for winning ugly, but celebrating the win would be equally misguided.

Last night’s victory was not a validation of growth, but a fortunate result of a game that shone a bright light on areas that should be of great concern.