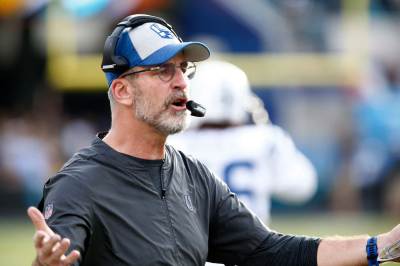 When Frank Reich finished last season 9-1 to make the playoffs, he was a genius. This season, not quite so smart as the Colts are a loss from hope evaporating for a season defined by what could have been.

With a Monday Night Football win tonight at New Orleans, the Indianapolis Colts will put themselves in a position where they could still wriggle their way into the playoffs.

This has been a disappointing season for the Colts because of their 5-2 start.  Given the remaining schedule after week seven, it seemed very likely they would win a mediocre AFC South despite the retirement of franchise quarterback Andrew Luck 15 days prior to the season opener.

Not only do the Colts need to win tonight, they need to win their final two – at home against the Carolina Panthers this Sunday and on the road in the season finale against Jacksonville.  All roads to the playoffs include the Colts winning out.  They also need help from the Texans, Titans and Steelers.

Everything that the Colts needed to happen yesterday to enhance their chances happened.  The Steelers, Raiders, and Browns lost.  The Texans beat the Titans, which was fine but unnecessary.

Those results enhance the chances of the Colts earning the second wild card, but the Colts are not out of the running to win the division.  If the Texans lose out, and the Titans lose to the Saints Sunday and beat the Texans in week 17, the Colts win the AFC South via tiebreaker by winning their last three games.

For the wild card, things get complicated.  Pittsburgh needs to lose out, but that is certainly possible as they finish the season with road tests against the Jets and Ravens.  If Tennessee loses out also, the Colts will be the sixth seed.  If Pittsburgh loses out and the Titans go 1-2 while the Colts win out, all finish 9-7, the three-way tiebreaker goes into effect and the Colts lose out.

The odds for the Colts to qualify are remote – ESPN calculates them as 2%.  But a chance is still a chance, and if that makes tonight’s game against the Saints a little more interesting, why not indulge in a little harmless hope?

To win tonight, the Colts defense needs to find a way to control Drew Brees in a way they failed with Jameis Winston last Sunday in Tampa.  Winston threw three picks, but also four touchdowns and 456 passing yards.  The Colts will be without Kenny Moore II, their best corner, as they try to stop Michael Thomas, the NFL’s most efficient receiver.

The Saints defense will miss DE Marcus Davenport and DT Sheldon Rankins, both of whom were injured in last Sunday’s win over the 49ers.  The Colts offense will try to control the ball and keep Brees on the sidelines.  Keeping the game close and trying to it in the fourth is is the plan.

That concept looks great on paper until you look at the last three Colts games – all losses.  The Colts either led or were tied during the fourth quarter, but were outscored 31-0 over those three final stanzas.

Managing a game is great until a team needs to make a winning play, and the Colts have failed in that effort often during the brief Jacoby Brissett era.  In 2017, Brissett helped the Colts take a lead heading into the fourth quarter of five games the Colts ultimately lost.  They were outscored that season 130-46.

This season, blowing games late hasn’t been all Brissett’s fault.  Fifteen missed kicks have directly contributed to four of the Colts losses.  Those wayward boots are the difference between 6-7 and 10-3 – a record that would steer the conversation to home field advantage instead of how to overcome 50-1 odds to make the playoffs.  For context, opponents have missed a total of two kicks against the Colts.  That’s a difference of 27 lost points via field goal and extra point attempts.

The Colts season comes down to tonight.  If they beat the Saints, another week of hope is earned.

And so it will continue until they lose, or Pittsburgh and Houston wins.