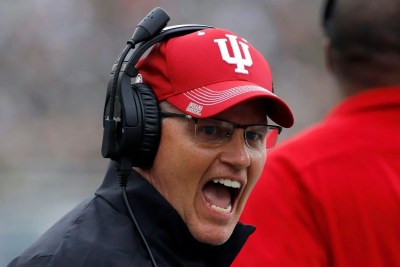 Tom Allen has an opportunity to prove his mettle as he responds to recent adversity.

February and March are usually quiet months for Indiana Football.  News from the football program usually creates no more than a small ripple across the Hoosier state.

Not so much this year.  Yesterday, we found out that freshman running back Sampson James entered his name in the transfer portal, but that might not have been the biggest loss of the day for the program that loves each other.

Alabama has hired Matt Rhea and David Ballou, who proved to be difference makers since joining the Indiana program two years ago as Football’s High Performance Coordinator and the Director of Athletic Performance respectively.

Without getting into scientific detail, Rhea and Ballou were very adept at helping three-star recruits exhibit the traits of four-star players.  Hoosiers became stronger and faster at a higher level than players at other Big 10 programs – hence, the popularity of Rhea and Ballou with Nick Saban.

If only that was the end of the bad news.  Tight end Peyton Hendershot was suspended indefinitely just over a week ago, and let’s not forget the transfers of left tackle Coy Cronk and quarterback Peyton Ramsey, who decided another offseason fighting for the starting job with Michael Penix was not in his best interest.

A cynic might see the sudden abdications of so many assets who made possible Indiana’s first eight win season in a quarter century as a harbinger of doom for both Indiana Football and coach Tom Allen.

Let me try to explain how each piece of this horrifying puzzle might not be a cause for panic.

It’s interesting during March to write about Indiana University without mentioning the basketball program.  That doesn’t happen very often, but attention – good and bad – is earned when the football program puts up eight wins and visits Florida for a bowl.

Tom Allen won’t be judged by these transfers and staff exits, but by how he handles them.  This is called adversity, and Allen has a chance to respond positively to it and make IU Football stronger.  Not only will it bring more wins to Bloomington, it will set a positive example for his student-athletes.

Allen finally has the opportunity to prove himself a capable head coach when playing behind a dwindling stack of chips.