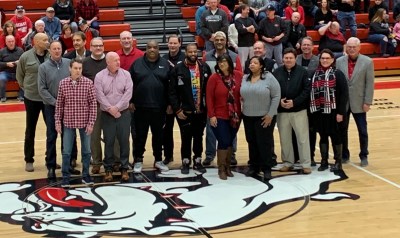 “Hi, I’m Mr. Cunningham.  Do you think we’ll be able to beat Jeff next year?”

These were the first words spoken to me at Scribner Junior High School after my family moved to New Albany, Indiana, from Lake Bluff, Illinois toward the end of my eighth grade year.  Confused by everything about Mr. Cunningham’s question, I shrugged and said, “I don’t know.”

I didn’t know who Jeff was (it’s what people in southern Indiana call Jeffersonville, a town that neighbors New Albany), and had know idea who “we” referred to or in what game we might beat Jeff.  I would learn very quickly that the only game discussed in New Albany is basketball.

Loving basketball is to New Albany as speaking Spanish is to Mexico.  There is no way to avoid it.  It took a little bit of time to understand the conversations about seventh graders who projected as contributors of the varsity.  I enjoyed basketball as much as anyone in my old hometown, but I never considered whether a seventh grader had what it took to win at Lake Forest High School, and I never met an adult there who wondered such things.

It seemed like basketball was the only thing people in New Albany wanted to talk about.  But New Albany High School’s basketball team wasn’t all they talked about.  They were also willing to debate the merits of the college basketball programs as Louisville, UK, and IU.  Fans were split in thirds with roughly an equal number of people backing each.

The period from 1978-1981 was a good one to fuel the debate about the Cardinals, Wildcats, and Hoosiers as each won a national championship.  In 1979, the year none of those three won, Larry Bird led Indiana State to the championship game against Magic Johnson and Michigan State.

In 1979-1980, my senior year at New Albany, the high school team was exceptionally big and talented.  Three of the starters were 6’8″ or taller, all could shoot, and they were unencumbered by individual ambition.  Ten of the 12 players went on to play Division One basketball.  As you might guess, fans responded in bulk as New Albany reeled off 27 straight wins.  A road game in Evansville – two hours from New Albany – was moved to Roberts Stadium to accommodate the thousands who caravanned down I-64 to watch.

Forty years ago yesterday, New Albany played Andrean High School as the first game of a historic doubleheader that illustrated exactly why basketball is as popular as it is.  A lifetime of work can be reduced to a single moment in time that either propels a team to victory and ecstasy or brings agony that will define a team forever.

New Albany dominated Andrean into the second half, building an 18 point lead.  Andrean’s Dan Dakich got hot, and New Albany went cold.  The lead shrunk to one, and when Mike Paulsin tried to win it for Andrean as the buzzer sounded, he was fouled by New Albany’s Jeff Stoops.

Paulsin stepped to the line.  If he made one shot, overtime.  If he made both, Andrean survives and advances.  If both were missed, Andrean goes home.  The reverse was true for New Albany.  Paulsin would be a hero or goat.  Same for Stoops, who was very emotional as he stood behind Paulsin, about to make history one way or another.

Paulsin missed both, collapsed, and was consoled by teammates.  Stoops and his teammates gathered themselves as a chance to conclude a perfect season was just eight hours away.

Broad Ripple and Marion played in the second semifinal, with the Rockets winning on a 65 foot buzzer beater by Stacy Toran.  There was a very questionable timeout by Marion that led to Toran’s opportunity and the Broad Ripple win.

In the championship game, Broad Ripple hit free throws they normally missed, and New Albany appeared to finally show fatigue as the weight of carrying the hopes for a community finally showed on the players’ shoulders.

Over the 12 hour period in which those three games were played, three dreams were granted and another three were crushed.  That’s the beauty of basketball.

That beauty was celebrated last month as New Albany’s team was honored during halftime of a home game against Columbus East.  The lone surviving coach, Charlie Vass, made the trip from El Paso, Texas, to be a part of the fun, and all but one of the surviving players gathered to reconnect and be cheered one more time in the same gym they repeatedly filled with 5,000 fans.

Vass told me after the ceremony, “I told my wife about the reunion, and how I needed to come.  She looked at me and said, ‘They’re going to honor that team?  But they lost.'”

She was right.  They lost – once.  They won 27 times, and gave a town thrilling and selfless basketball during the strange and special winter of 1980.  There was agony and there was ecstasy.  There was sacrifice, and there were rewards.  That’s basketball in New Albany – and everywhere else.

Forty years ago today, 3,000 fans came to New Albany’s gym to welcome home that losing team.  Players and fans hugged each other and wept together in a celebration of the love they felt for the team and each other.  Results matter, but not so much as love and friendship so obvious among basketball players.

Paulsin missed those two shots, but he succeeded in life as a father and CEO.  Toran excelled as a defensive back at Notre Dame and the Oakland Raiders before being killed in a car wreck.  Stoops has lived a happy life filled with personal and professional successes.  Dakich built a successful career and a coach and broadcaster, with a blended family of four great kids.

The fires of New Albany’s basketball fans were recently stoked again by the team Romeo Langford led to a state championship.

Basketball is a remarkable game, worthy of the intense love New Albanians feel for it.  It tempts with moments of individual excellence but ultimately honors disciplined selflessness.  Sometimes shots fail, and sometimes they don’t.  The game provides opportunities for adversity and redemption, just as life does.  Countless hours of isolated work hedge odds toward success, but cannot guarantee it.