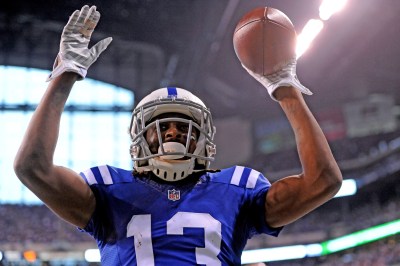 With the draft over and free agency mostly done, Indianapolis Colts GM Chris Ballard has one more big decision to make this offseason – should the Colts meet receiver T.Y. Hilton’s price to sign him to an extension.

Ballard should wait until the 2020 season is in the books to pull the trigger on a new deal unless Hilton is so eager that he would accept a below market number to stay in Indy for another couple of years.

Hilton wasn’t specific in yesterday’s conference call with the media about the kind of cash or term he needs to be able to continue his ascension on the ladder of the Colts all-time great receivers, but he left no doubt he wants to be here, “I mean I want to be a Colt for life, but it takes two sides. It is up to Mr. Irsay and Chris to get the job done. So for me, I want to be a Colt. So, you heard it from me.”

Hilton was reliable and productive though the first seven seasons of his career as a Colt, and then last year happened.  After four trips to the Pro Bowl and one glorious season when he led the NFL in receiving yards, Hilton faltered in 2019 with only 45 catches for 501 yards in 10 games.

Ballard’s task is to assess if last year’s statistical cratering was an anomaly – or a glimpse of the future.  Was it Hilton’s ankles and calf tear, or did Jacoby Brissett fail to see “The Ghost?”  Will Philip Rivers deliver the ball to Hilton in a way that exploits his ability to create space behind the defense?

This season, Hilton will collect $14,542,000 in the final year of the five-year extension that went into effect in 2016.  There serious doubt whether at this point in his career Hilton is worth that kind of jack.  The version of Hilton who caught 91 balls in 2016 would be a bargain at that price. The 2019 Hilton would be vastly overpaid, and to carry that number moving into 2021 and 2022 would be irresponsible.

To make matters more complicated, this weird offseason has made it very difficult to get a handle on Hilton’s well-being and development.  That’s why they pay general managers are lot of money.

Hilton acknowledges injuries have been an issue, but is ready to prove himself worthy, “I mean my work speaks for itself. When I’m out there I know what I can do. But these last two years I’ve been a little banged up so this year if they want me to prove it, I’ll prove it.”

Fans like to look at what has been, and they throw around terms like “deserve” as they champion the cause of extending contracts for a team’s most popular players.  Sadly, for a guy like Hilton, fans have no voice in the decision.  GMs make their decisions by looking at what’s most likely to come, and what has been is only a part of that process.

At his best, Hilton is a dynamic playmaker who forces a defense to adjust to his presence.  Last year (and at the end of the 2018 season), injuries corrupted his ability to perform at a high level – especially when it mattered most.

Ballard would be foolish to ignore 2018 and 2019, but he would be equally ill-advised by tossing out the first six seasons.

Best to check his bet, and wait for 2020 to force his hand in one direction or another.