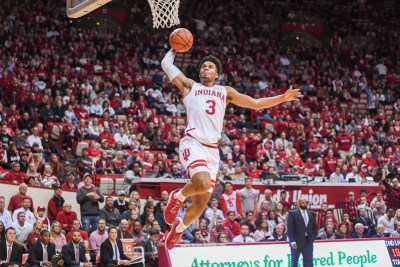 This is the kind of shot Justin Smith could absolutely hit, and he will take it to Fayetteville.

Former Indiana forward Justin Smith has landed.  He will take his talents to Fayetteville as a member of the Arkansas Razorbacks for his final season of eligibility.

I hope Smith finds what he is looking for, but I’m at a loss as to why he left Bloomington for a program like Arkansas.  The Hoosiers are on the come, while Arkansas is stuck in the middle of a mediocre SEC, as it has been since Nolan Richardson’s “40-minutes of hell” teams.

Arkansas finished last season 20-12 with a conference mark of 7-11, good for 10th place.  They were likely to be on the outside looking in for the NCAA Tournament.

Smith will join talented teammates Mason Jones and Isiah Joe if they return to school.  Both have declared for the NBA Draft, but if they return for another year with coach Eric Musselman, Arkansas could be better than they were last year.  In ESPN’s way-too-early mock NCAA Tournament brackets, the Razorbacks are listed as a nine-seed.

There is another issue in Fayetteville that is peculiar to the city – the stench of the many chicken farms in the area.  It hits like a wave of manure scented tear gas as you get off the plane at the airport just northwest of town, and it never dissipates completely on the drive to campus.

As a personal aside, when I visited Fayetteville for a summer basketball tournament, I went to the Walmart on a Friday night at 10 p.m. to grab some food for my son and some of his teammates.  I hurried to the express lane, where a girthy fellow was offloaded 70-80 cans of cat food from his cart to the register.  I won’t judge the extreme volume of cat food, but if you are going to use the express lane, the 12-or-less number of items is not waived because you have 70-80 of the same item.

It’s quite likely Smith was fed without wandering into a Walmart filled with chicken farmers who embrace an aggressive cat culture, but still this was a town without much in the way of attributes that would demand a soon-to-be college senior to leave a beautiful city like Bloomington and a team that might be ready to win.

Smith will bring versatility on the defensive and and a wayward shot beyond eight feet.

Maybe the rim are wider down in Fayetteville.  Who knows?

Of course, Indiana fans wish Smith nothing but the best, but have to acknowledge that Archie Miller likely won’t have much trouble replacing his meager offensive contributions.  Having three guys on the floor at the same time who couldn’t shoot from beyond 10 feet was not conducive to efficient scoring, so the Hoosiers should take a step forward offensively.