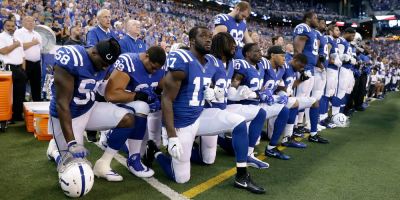 Next time when we see this, try to think of why Colts are kneeling rather than fixate on what it means to you.

Kneeling during the National Anthem prior to sporting events is going to happen, and it will not be done only by widely scattered outliers.

Entire teams of blacks and whites will take a knee in solidarity to protest all forms of racism.  They will be joined by coaches, staff, and even fans.  It will happen across many if not all sports.

If you need a couple of months to prepare for that, the NBA will not start play until July 31.  Take a deep breath, brace yourself, and ask why players will take a knee.  As you listen to those who offer explanations, maybe you will grow to understand.  Through that empathy, your fury might abate.

For some, outrage will counter the silent and peaceful protest.  People, mostly white, will respond like Archie Bunker did when threatened by his son-in-law on episodes of All in the Family by shouting, “America, Love it or leave it!”

This time, instead of Meathead raising his voice as the representative of a defensive minority, the majority will provide a calm explanation.  Instead of reflexively describing America and all things American as “great,” protesters will encourage listening and empathy.  They will embolden others to lift those in need rather than use their backs as a ladder to wealth and satisfaction.

Because we enjoy separating ourselves into good and evil, we will have yet another dispute the media will capitalize on to drive us apart.  North vs. South, Blue vs. Red, Black vs. White, Coke vs. Diet Coke, Vegan vs. Carnivorous, Blue Collar vs. White Collar, Northside vs. Southside, Mask vs. No Mask, Hoosiers vs. Boilermakers, and dozens of other conflicts define us every bit as much as those issues which unite us.

Both sides will be demonized by the others.  Kneelers don’t respect the flag and military.  Those who don’t kneel are racists or at the very least poor listeners with cold hearts.  I’m getting exhausted imagining it.

My hope is that each of us does nothing more than listen to each other with an open heart and open mind, and then do whatever he or she believes is right.  That seems like a reasonable place to start.

Racism is not going to end because teams kneel or don’t.  It’s going to come down to our ability to trust and respect one another enough to empathize rather than judge.  The only road to a post-racist society is through tolerance and trust.  If we can’t find respect for one another, all other conversations and demonstrations are moot.

In 2017, when eight Indianapolis Colts players took a knee during the National Anthem, I asked safety Malik Hooker why he knelt.  Hooker said he would prefer to keep that to himself.  I was disappointed in his response for a variety of reasons; the most important of which was that he didn’t trust enough to share what might have been a meaningful thought about race.

I hope the Hookers of 2020 trust enough to know that people aren’t playing gotcha.

And I hope that those who stand for the Anthem are afforded the same opportunity to explain their decision without instant anger, blame, and judgment.  We need to allow the latitude for people to exercise their right to free speech regardless of our opinion of their stance.

How sweet would it be for people to see a demonstration of a belief that differs from theirs, and respond with a thumbs up or some other affirmation.  Then we’ll know we are headed in the right direction.

This conflict, as with all the others, originated with a failure to communicate honestly and listen with empathy.  It will end with the opposite behaviors.

Maybe this set of impending protests will have a different end because we have almost two months to prepare emotionally for them.

2 thoughts on “There will be kneeling by NFL teams and Colts; if you need to prepare to empathize, you have two months”