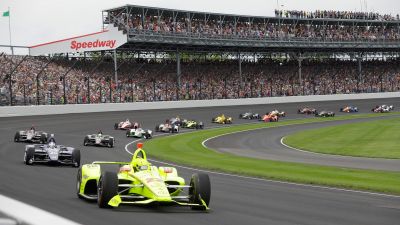 The Indianapolis Motor Speedway won’t look exactly like this, but whatever it looks like on live and local TV in Indy will be a plus for those who cannot attend.

(Moments after this was published, it was announced the Indy 500 blackout has been lifted!  Thanks to the IMS folks for doing what is right.)

One month from tomorrow, the Indianapolis 500 will be run in front of 25% of the normal crowd.  That’s because Covid-19 has made it unsafe for the typical crowd of 300,000 to show up.

That leaves almost a quarter of a million people who would attend sitting at home wishing they were at the Indianapolis Motor Speedway.  Many are senior citizens with health issues that could cause Covid-19 to became fatal if contracted, and a significant number of them have attended the race most years since their childhoods.  It’s a big part of their lives, and concessions to Covid-19 are forcing them to stay home.

For these people – and in the name of logic – the Indianapolis Motor Speedway must suspend or eliminate the arcane local TV blackout that has kept Indy residents who cannot attend from watching the race live.

While the rest of the world has embraced the theory that live TV coverage is the world’s best marketing tool, the Indianapolis Motor Speedway has prohibited the race from being shared through that medium.  Yes, the race is always shown on tape delay a few hours later, but that’s hardly the same – especially for those who are prevented by attending because they are afraid they will die as a result.

Let’s forget the marketing aspect of sharing the race live for young people who don’t yet understand the race how cool the Indy 500, and stick with the humane aspect of making sure the elderly and ill can watch.  Under no circumstance does the blackout make sense, but it is cruel during a pandemic that continues to cause mayhem.

It is especially nasty to keep longtime fans – and by longtime, I mean the thousands who have witnessed every Indy 500 beginning at some point in the 1950s – from watching the race live on TV if they feel it is unsafe to attend.

Those who run the Indianapolis Motor Speedway have made this call before.  When the 100th running sold out, they lifted the blackout so those who could not buy tickets would not be shut out.  It seems even more reasonable this time around given the bizarre circumstances.

I’m optimistic new owner Roger Penske will make the sensible, data-driven decision to make the race as widely available as possible in the future using media of many types, and the blackout will become an obscure footnote discussed by old-timers while future generations of Hoosiers learn about how cool the Indy 500 is through watching at home.

But this year, none of that matters because the immediate need is to serve elderly fans who have embraced the race through generations by buying tickets, swag, and making the it a huge part of their lives.  They have earned the ability to watch despite being unable to attend.

No other decision is acceptable.

One thought on “With tickets limited and health concerns great, IMS must lift the local TV blackout”