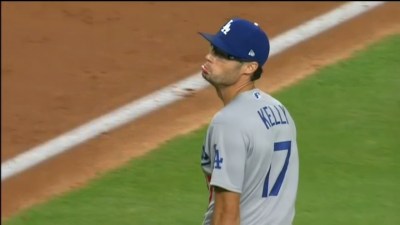 Joe Kelly made a pout face after striking out Carlos Correa to end the inning in which he through at several Houston Astros cheaters.

It’s not because he threw at members of the Houston Astros as retaliation for cheating the game during the 2017 season – a year they won the World Series – but because he laid out the reasons for his actions so strongly while a guest of “The Big Swing” podcast with Ross Stripling.

Here is a portion of what Kelly said:

The people who took the fall for what happened is nonsense.  Yes, everyone is involved. But the way that was run over there was not from coaching staff.  They’re not the head boss in charge of that thing. It’s the players. So now the players get the immunity, and all they do is go snitch like a little bitch, and they don’t have to get fined, they don’t have to lose games.

When you take someone’s livelihood to save your own ass, that’s what I don’t like. Cheating? They cheated. Everyone knows they’re cheaters. They know they’re cheaters. It’s over. That’s done with. But now they mess it up by ruining other people’s lives, so they f—ing it up twice. When you taint someone’s name to save your own name, this is one of the worst things that you could probably do. … That really friggin’ bugs me. I think I’ll be irritated forever.

Kelly’s suspension was reduced from eight games to five games yesterday, and it should have been reduced further.  It is not right to throw at a batter’s head EVER, but Kelly is right in what he said.  The wrong done by the Astros players was worth a significant penalty that will never be assessed because of the cowardice of MLB Commissioner Rob Manfred.

Somehow, our society has decided that ratting is proper behavior and that it should be rewarded.  Instead of holding wrongdoers accountable through a thorough and intense investigation, Manfred took the easy way out by offering blanket immunity for all players who tattle, and crushed the player who had graduated into management, the manager, coaches, and GM.

Justice must be served, and if it can’t be asserted by the feckless Manfred, than a 95 mph fastball to the fleshy part (not the head – EVER) will have to suffice – as it has in MLB for 150 years.  For good measure, a public scolding (like Kelly’s) should follow.

Kelly has been willing to call out this farce, and because of that – I’ll be a Joe Kelly fan forever.