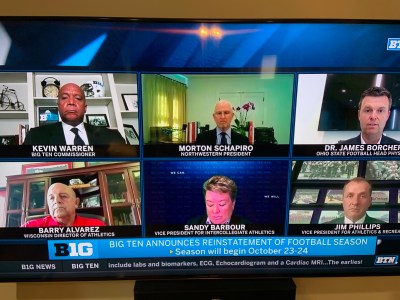 The Big 10 braintrust that announced the return to play this morning got it right in the end – and that’s what matters.

Whining about how the Big 10 made this suddenly savory college football sausage is unnecessary.  Why allow bitterness over process disrupt our joy?

Just a few minutes ago, conference bigwigs concluded their media zoom call in which they outlined several parameters for football’s return and explained their change of heart leading to the unanimous approval from presidents and chancellors.

They used the word “pause” approximately 6,800 times in describing the decision to cancel or postpone the season, and said that when medical opinions changed, so did their perspective.

So it’s all good – and all set.  Practices can begin immediately, and games will commence the weekend of October 24 – as long as flare ups do not occur on teams and campuses.

The schedule will be constructed and announced by the end of the week, according to Wisconsin athletic director Barry Alvarez.

Here is what we know:

On October 24th, we will all forget about the strange series of events in which the Big 10 indulged since revised schedules were announced in early August.  It won’t matter whether commissioner Kevin Warren was effective in his leadership.  The season is saved.  Football will happen, and according to medical experts, it can be done with relative safety.

This is a good day for the Big 10 and college football.  It will be different without the opportunity to watch in person and reconnect with friends via tailgates, but altered football beats the hell out of no football.

The sausage wasn’t made easily or without complications, but it will be delicious nonetheless.