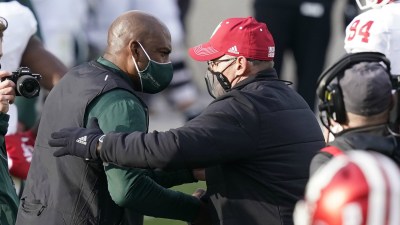 Tom Allen is getting pretty good at being a gracious winner with opposing coaches – much better than I am at expecting his team to win.

“What are you doing?  Kick the field goal!  Make it a four-score game!” – me to the TV as Indiana went for it on fourth and two from the Michigan State five yard-line, ahead 24-0 with 4:25 left in the third quarter.

Something is wrong with me!  Shutting out Michigan State in East Lansing is yet another thing the Hoosiers have not done since 1969, and I’m yelling about math.  Indiana finished the job without that field goal and another chip shot they passed up in the fourth quarter, beating the Spartans 24-0.

Indiana’s record is now 4-0 in the Big 10 for the first time since 1987, when ironically Michigan State beat the Hoosiers 27-3 in East Lansing.  IU fans probably remember better Lorenzo White‘s stats from that day than Michigan State boosters.  His 56 carries for 292 yards ended the Hoosiers chances of going to the Rose Bowl, but I digress.

A neighbor walked past the house at 11:45 this morning.  He opened our talk with a hearty “Go IU!”  It wasn’t more than a minute into our talk that he voiced what every Indiana fan has felt since Michael Penix stretched for the pylon in the second overtime against Penn State.  “I don’t know how to feel or what to think,” he said.

Every Saturday, I fear the worst and then feel silly after the first couple of drives.  Indiana has pivoted from laughing stock hoping to pull an occasional upset to a bonafide badass Big 10 team with speed, depth, and the right amount of swagger.

Like most Indiana fans, I thought 3-5 was a reasonable guess at their final record for this shortened season.  IU has been a program that traditionally fattened its win total with games against lesser non-conference teams as it hoped to slip into a bowl with a 6-6 record.  The double overtime win against Penn State, an expected thrashing of Rutgers, a hilarious beatdown of the fighting Harbaugh’s of Michigan, and now a shutout of Sparty have exceeded that win total with four contests left.

The second half of the season begins with the Hoosiers paired against #3 Ohio State in Columbus, and of course IU fans are wary of getting too enthusiastic about the prospects of bumping their record to 5-0.  On the line will be a potential trip the Indianapolis for the Big 10 Championship and a possible top 5 ranking.

Those heights are dizzying for fans of the all-time losingest Power Five football program.  I went to IU in the 1980s, and it has never occurred to me that they could contend for a National Championship.  I don’t mean that I rejected the idea.  It’s that, like being the first man to walk on one of Jupiter’s moons, the possibility has never existed in my brain as a conscious thought.

I was content being from a university where “we never lose a party.”  Tailgating with every intention of going into Memorial Stadium but having too much fun with friends to leave the beer and laughs led to a lot of wonderful Saturdays and no regrets.  What were we going to miss – bearing witness to a miserable beatdown or crushing collapse?

COVID has taken that choice from us, but I’m certain that I would now be unusually conflicted as kickoff approached.  For the first time since 1967, the party on the inside might be better than the party on the outside.  That reality might seem odd at every other Power Five university, but this is Indiana.

I keep waiting for the traditional harsh reality of Indiana Football’s mediocrity to return, as though the Hoosiers posted four wins through equal shares of good luck and COVID-related chaos, instead of improved talent and increased discipline.  I’ve anticipated it during each of these four wins, only to be thrilled that it didn’t.

This Saturday, the opponent won’t be some group of slaps from a down-and-out formerly respected program.  Indiana will play the third-ranked Ohio State Buckeyes.  Indiana and Ohio State will both be ranked in the top 10 for the first time in the history of their series which dates back to 1901 – which pre-dates polls by 33 years!