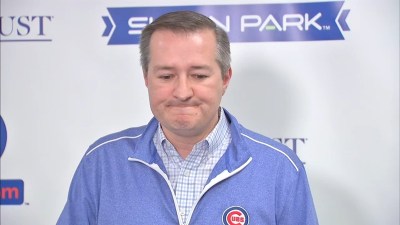 Cubs fans misery – thy name is Tom Ricketts. Hope dies where he treads.

Evil pinheads own my favorite baseball team, and they traded away their best pitcher today for four teenage prospects and a starter who makes Greg Maddux look like a body builder.

The Ricketts Family, led by world class profiteer Tom, have correctly assessed the Cubs fanbase as rubes eager to dole out cash for the Wrigley Field experience regardless of the quality of the on-field product.  They manage their message well, even as key components quietly vacate the premises, but the truth is the bottom line they care most about shows dollars, not wins.

There is nothing wrong with making a buck – or millions of bucks – but to do it while knowingly providing a lessened product stoops to a level of villainy Cubs fans must reject with prejudice.  Incinerating a roster capable of winning a division to stuff money in Ricketts’ pockets is the kind of crass short-term bloodsucking I hoped would never be seen at 1060 West Addison.

We have seen incompetence from a variety of Cubs front offices, and accepted it as part of the fabric of the franchise, but never evil.  For laughs or tears, here is a partial list of some of the most egregious moments of stupidity in Cubs history:

I could go on and on adding items to the list of silly moves that doomed the Cubs to relentless failure for 108 years, but you get the point.  The Cubs weren’t tight with a buck as much as they were stupid.  Not anymore.  The switch has been flipped to smart but cheap.

The difference between Ricketts and the Wrigley Family and Tribune Company ownership eras is in intent as well as execution.  Ricketts knew he needed to win to earn, so he hired Theo Epstein to build a winner.  That chummed the water for a generation of Cubs fans eager to finally invest in a bonafide contender.  Despite Joe Madden’s efforts to tank game seven of the 2016 World Series by misusing his bullpen, the Cubs won their coveted World Championship.  From that moment forward, the Cubs were guaranteed to print money faster than Ricketts could possibly spend it.

Ricketts spent nearly a billion buying buildings surrounding Wrigley, launching the Marquee Network, and rehabbing the ballpark.  He extolled these moves as a holistic measure to ensure Wrigley Field’s sustainability because of its beauty, heritage, and historical import.  The truth, we understood as we are not as gullible as Ricketts believes, was that the Cubs without Wrigley would draw 13,000 fans on a good day.

Because Ricketts didn’t sleep through classes at the University of Chicago, he grasped that buying the Cubs was the first of a series of shrewd real estate deals that would earn his family hundreds of millions in the short term, and billions if they ever divest.  Players like Darvish are poor investments because no one buys a ticket to watch him pitch.  The Cubs have drawn a minimum average of over 32,000 fans every season since 1998 whether Darvish or Ted Lilly pitched and whether Javy Baez or Neifi Perez played shortstop.

Winning might be fun, but it is no more profitable than losing.  Ricketts is no dope.  He might be an evil exploiter of Cubs fans’ love, but he knows what moves the needle on Chicago’s Northside – sunshine, beer, and friends & family.  It’s where we gather through thick and thin, and pay through the nose to do it.  Who the guys in Cubs uniforms are is irrelevant as long as we have a great time.

So to quote the awful Scandal song from the mid-1980s, “Goodbye to Yu!”  And it’s goodbye to Kyle Schwarber.  Soon, it will be goodbye to Kris Bryant and Willson Contreras, and hello to .500 baseball.  The Cubs will still draw three-million and make Ricketts richer and richer.

The only hope to force a change of attitude among the Ricketts and chief financial goon Crane Kenney is to demand winning as a condition for our attendance.  Better baseball can be had at the other end of the Red Line as the White Sox rise from mediocrity with big bats and Tony LaRussa’s return, so maybe we will opt for sunny afternoons at Guaranteed Rate Field.

Surely, there has to be a less painful way to prod Ricketts to invest – or cease divesting – in winning players than taking the El to the south side to watch the pale hose, but I can’t think of one.