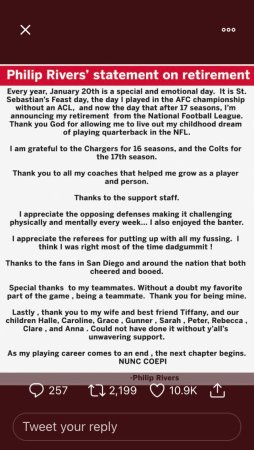 Philip Rivers retirement statement is filled with Rivers-isms that speak to his professionalism, humor, pride, and devotion.

The Colts decision about whether Philip Rivers should return as starting quarterback was made for them today by Rivers, who has decided he’s ready to move on with the next step in his life.

Rivers played valiantly throughout his only season with the Colts, leading them to an 11-5 record and a return to the playoffs.  He established himself as a solid citizen in the Indianapolis community, despite having limited contact and exposure to fans and media.

There was no doubt that the Colts were staring at a difficult decision regarding Rivers regardless of which decision they made.  Moving on without him would be tough because from the neck up, there is no one better.  Bringing him back would be tough because everything below his neck was less dynamic than necessary to get to the Super Bowl.

There was a fixed ceiling with Rivers, but also a fixed floor.

So now the Colts need to figure out what to do at the most important position in football while having only one quarterback under contract.  That quarterback has not only never taken a live NFL snap; he’s never dressed for a game.

There is the possibility that the Colts re-sign back-up Jacoby Brissett, but the Colts and their fans know what that likely means – a season of mistake-free football that also fails to produce explosive plays or more than seven wins.

Reliable free agent quarterbacks at the level necessary for the Colts to take a step forward simply do not exist, and trading for one will cost the Colts draft assets they loathe parting with.  That leaves general manager Chris Ballard in a tough spot, and that means that it’s time for him to earn his money.

Ballard has done an excellent job of building his roster from the inside out, but the time has come to find a longterm leader who can take that foundation and lead them beyond 11-5 and a first round playoff exit before it ages out of relevance.

Whomever the Colts deal for, develop, or select, he will be coach Frank Reich’s fourth different starting quarterback in four seasons, which must be some kind of record for a team with a winning record during the first three seasons of a coach’s tenure.

Rivers will be remembered for being tough, smart, verbose, and stationary during the final stanza of his hall of fame career.  There were plenty of reasons to doubt that Rivers was the answer to get the Colts back into the playoffs, but there they were – as tough and relentless as their quarterback – going toe-to-toe with a team that could very well win the Super Bowl.

Ballard was right when he went all in with $25-million of Jim Irsay’s cash behind an old man I can beat in a 40-yard dash, and he needs to be right again.  But this time the stakes are higher because the collateral damage of the wrong call could take years to undo.  Rivers was a one-year roll of the dice.  This time, getting his man will cost more than dollars and so the risk is elevated.

The ingredients for a championship cocktail have been acquired and poured.  All Ballard needs now is a straw to stir it.