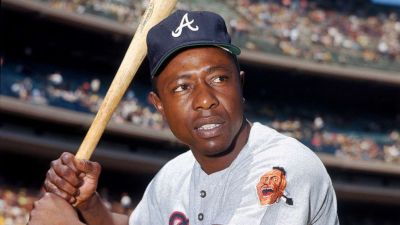 I saw Henry Aaron play twice, but he wasn’t spectacular, and I wasn’t too bright, so I remember nothing of his play in those two games.

Dignity is a word that is not thrown around much these days.  Loud and flashy athletes are everywhere, and national media loves devoting time to them.  We had a guy here in Indianapolis until recently who wanted to be “feathery” – whatever that is.  Quiet guys who let their play do the talking are few and far between.

I heard the difference between Aaron and Willie Mays as defensive outfielders described like this – “Aaron always got a great jump, ran to the spot, and got to where the ball would land before fans saw him move.  It looked like every flyball was hit to the exact spot where Henry stood.  Willie timed his pursuit of the ball so he was sprinting when he got to it.  Made every catch appear to be spectacular.”

Aaron was anything but spectacular.  He was all-star in every year of his career but the first and last, but won only a single MVP.  He never hit 50 home runs in a season, but averaged 37 between 1957 and 1973.  He walked 19 times more in his career than he struckout.  And he did it against pitching staffs loaded with hall of famers.

In 2019, as players worked to maximize their odds of hitting a home run with poor discipline and launch angle, 101 major league hitters struck out at least 100 times.  As Aaron became the home run king (until the chemically-enhanced Barry Bonds barely eclipsed his record), he never once struck out 100 times.  I’m not saying baseball was better when Aaron played, just that Aaron was the best before syringes, load management, launch angles, and analytics.  He remains arguably the best of all-time.

To reduce Aaron to the sum of his statistics misses the point about a man who overcame incredible racism and death threats to become both a great player and revered human being.

It’s a shame that a man like Aaron is taken at any time, but it’s especially grievous that he passes during a time when modesty is ignored by many and the spoils go to the loud and outrageous.

It’s not that Aaron was silent.  He was an outspoken opponent of racism throughout his life, much of which was spent in Atlanta, a city well acquainted with prejudice – especially during the 1960s when his Braves moved there from Milwaukee.

When Aaron spoke, it was never to glorify himself.  He praised friends and championed causes on his social media platforms.  He chose to shine his substantial light on others rather than train it upon his own brand.

Dignity and respect.  Wouldn’t this be a great world if we took Aaron’s example a strived for it instead of massive wealth, Q ratings, larger social media footprints, and fame.

Being a good man and diligent professional should be enough for all of us – not just Henry Aaron.