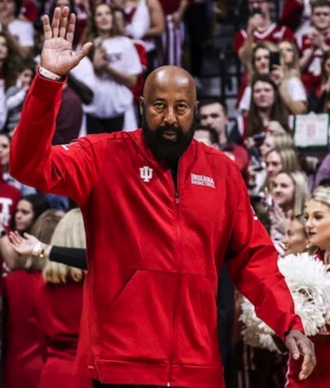 Mike Woodson might just wind up being the right coach at the right time in Bloomington – despite not being the first choice.

On his first swing, Indiana University athletic director Scott Dolson swung as hard as he could and missed an unhittable Brad Stevens breaking ball.  Then, he choked up an inch, got the Mike Woodson batting practice cheese he was looking for, and got a rally going as he strung together multiple hits.

That’s the way life works in big time, big money college athletics.  And just like baseball, a run is a run – whether the product of a 460-foot bomb onto State Road 46 or a double down the left field line followed by a couple of ropes up the middle.

The home run swing was reportedly a seven-year, $70 million offer Stevens declined to remain the coach of the Boston Celtics, a team with a flawed roster and scant chance to advance to the NBA Finals before GM Danny Ainge‘s patience finally runs thin.  The double down the line was a six-year, $18 million deal with IU alum and former NBA coach Mike Woodson.  The base hits were additional hires of three-time Big 10 coach of the year Thad Matta and IU alum and longtime Michigan State assistant Dane Fife.

Dolson swinging for the fences was laudable whether he connected or not.  IU fans were tired of coaches hired for economic reasons, and a run at Stevens was overdue.  That the strong back-up plan that was executed after Stevens said no shows the kind of direction athletic departments need.  Plan B might be a better play than Plan A!

Stevens was always a long shot.  Indiana is home for Brad.  When he was a kid, visits to Assembly Hall with his dad for IU basketball games were common.  Maybe those memories and a desire to be closer to home might compel him to yank his temporary root system out of Boston – America’s most provincial city – for the more friendly confines of his native Indiana.  Maybe not.  Worth some conversation at least.

The $10 million per year would have made Stevens the highest paid coach in college basketball, and Stevens has been the coach of the Celtics for almost eight seasons – a long time for a guy to never have led his team to the NBA Finals.  I don’t know what the record for NBA coaching longevity without a trip to the Finals, but I’m sure Stevens is closing in on it.

If ever there was a time to give Stevens an excuse to come home, this was it.

When it didn’t get done, Dolson turned his attention to a pitch he could hit.  Woodson was back in the NBA as an assistant for the Knicks, but was more than willing to accept 30% of the money offered to Stevens to professionally return to a college campus for the first time since 1980.  Because of the massive savings, Woodson and IU were able to offer Matta and Fife the kind of cash that motivated them to invest their talents in restoring greatness (or at least competence) to Indiana Basketball.

While Stevens to Indiana would have been a great story, it would also have marked yet another beginning point for the re-plating of the basketball culture.  Stevens may have been an Indiana fan, but never a part of a successful IU team.  He would have brought “Brad Stevens basketball” to Bloomington, and while that would have been a solid improvement over Tom Crean or Archie Miller basketball, it would not have been Indiana Basketball.

With Woodson and Fife, there are two alums who were a part of Indiana’s successful past who also appear able and ready to forge toward a successful future.  With Matta, Indiana hired a guy who was a consistent pain in its rear for the 13 years he spent running Ohio State’s program.

So far, so good for Indiana.  Woodson has kept the majority of his roster intact, while losing Joey Brunk (Ohio State), Armaan Franklin (Virginia), and Al Durham (Providence).  While saying goodbye a junior-to-be like Franklin is unfortunate, keeping Trayce Jackson-Davis, Khristian Lander, Parker Stewart, and Race Thompson sets up IU for a mostly seamless transition.

Anytime a critical hire is required two paths are needed – the dream candidate and the Plan B scenario.  Dolson executed Plan B well enough that fans may be grateful one day that Dolson whiffed on the dream.

A double and a couple of base hits might end up being a lot more fun to cheer for than the home run Dolson tried valiantly to barrel up.