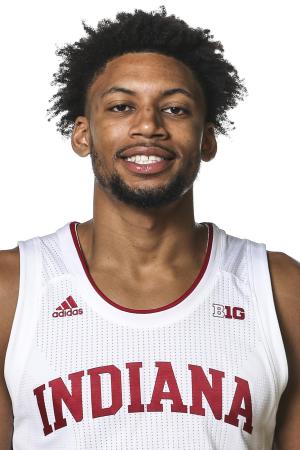 Jerome Hunter is leaving Indiana’s Basketball program, but is not yet listed in the transfer portal.

That generally means the player did not initiate the separation from his program.  Indiana made the announcement and included a quote from coach Mike Woodson, and that usually does not happen when the player opts out either.

It’s been a while since Indiana told a student-athlete to pack a bag.  The last I remember was Remy Abell.  Maybe Woodson and Hunter came together and decided the separation would be mutually beneficial, maybe not.

Woodson’s comment was typical given the situation, “We appreciate everything that Jerome has done as a member of the program and wish him nothing but the best in the future.”

Hunter came to Indiana as a top 50 recruit from Ohio.  A leg injury kept him off the floor as a freshman.  In the subsequent two years, Hunter was a complementary player whose contributions were uneven.  He hit 34.2% from beyond the arc, but only 51.9% from the line in 55 games, four of which he started.

Problems staying focused arose last season for Hunter, according to former coach Archie Miller‘s comments following his absence from an overtime loss at Illinois on February 2nd, “Jerome is a good kid. He is a good player. We could have used him tonight. The bottom line is, when he is right, and concentrated on what he is supposed to do he can help us. I don’t think right now he can help us until he shows me that. That is, it for that. It was my decision and it will be to be determined when he plays again.”

There were moments on the floor when Hunter was lost defensively and seemed to have his own ideas how the offense should operate.  At other times, his athleticism benefitted the Hoosiers.

Whether any of that led to Hunter no longer being a Hoosier is unknown.

What is known is that Indiana continues to recruit players Woodson believes can help win game, and until Hunter’s slot opened the Hoosiers were at the 13 scholarship limit.

Woodson is taking a long look at 7’0″ transfer Michael Durr, who transferred to Virginia Tech from South Florida, but is now looking for another home.  Indiana would love to have another big to compliment Trayce Jackson-Davis and Logan Duncomb on the block.

There was a time under previous coaches when Indiana’s loss of a complimentary player would have been heavily criticized.  Those days are over.  Five years of not being invited to the NCAA Tournament will do that to a fanbase.