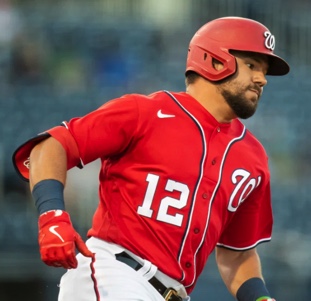 Kyle Schwarber has broken into a home run trot nearly as often since June 12 (15) as his entire former team (22).

Kyle Schwarber has hit 15 home runs in his last 16 games.

Fifteen homers is a lot in 16 games, which is 10% of a season.  Prorated over an entire season, Schwarber would total an astronomical 150 home runs.  That’s a more slow-pitch softball number of dingers than baseball.  Schwarber’s success pleases me because he is a really nice guy and graduate of Indiana University.  That the former Chicago Cub is doing all this damage since June 12th as a Washington National has me more than a little disturbed.

The Cubs made the decision not to bring Schwarber back as a cost-cutting move.  They allowed him to sign with the Nationals for $7M this season – $10K less than the Cubs paid him last year.  There is a mutual option for next season that could lift Schwarber’s salary to $11.5M.

The Cubs filled the Schwarber void by bringing in Joc Pederson.  They signed him to a similarly structured deal – one year, $4.5M with a mutual option for $10M.  Pederson has hit four fewer home runs this season than Schwarber has in the last 17 days.

It would be easy to castigate Cubs president Jed Hoyer as some kind of moron for making this swap if not for two reasons:  Hoyer’s boss is owner Tom Ricketts – a nickel counter of the first order, and today is June 29 – leaving more than half the season for Pederson to get similarly hot in July, August, or September.

Hoyer is not entirely off the hook, but with the Cubs scoring only 43 runs since Schwarber began blasting bombs in bulk, it certainly is not the best look for the franchise that used to crow about how they would never rebuild because so many robust revenue streams had been established.

The Cubs face a game tonight and another tomorrow in Milwaukee that could leave them six games behind the Brewers as they try to remain relevant enough to not become sellers at the trade deadline.

With Kris Bryant, Anthony Rizzo, and Javy Baez – the core three from the 2016 World Champions – scheduled to become free agents, Hoyer has a decision.  He can roll the dice that his flawed team somehow gets hot enough to make a playoff push, or deal those three to contenders for a bounty of prospects that would re-stock the Cubs anemic farm system.

Already gone are Cy Young candidate Yu Darvish and Schwarber, so what might be the point in hanging on to Bryant, Rizzo, and Baez?

It’s sad to see the heroes of the first ever World Series winner on the north side of Chicago (yes, I know the Cubs won championships in 1907 and 1908, but they did it on the west side of town) devolve into a soulless gaggle of mediocres, but with Ricketts running the show I supposed it was inevitable.

Maybe the smart play is to cheer for the 2016 Cubs wherever they play rather than the cut-rate group Ricketts has instructed Hoyer to assemble – at least until they get good again.

I hope Schwarber hits another three bombs tonight, and that Baez, Rizzo, and Bryant go similarly bonkers after they are traded to a team committed to providing fans a competitive product.