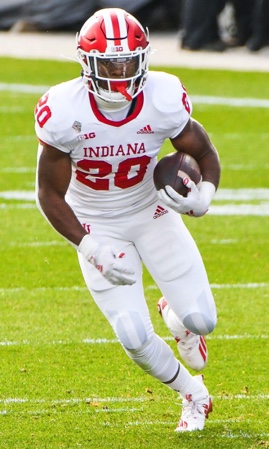 Indiana running back Tim Baldwin will transfer to another school, but if he is like many transfers he might be bringing his biggest problem along with him.

Transferring as an option for athletes facing manageable adversity cheats them of the best lessons that come from playing a sport.

This post is prompted by the news that Indiana backup running back Tim Baldwin has entered the transfer portal five games into this season and Crispus Attucks basketball player Jalen Hooks will be transferring to a California prep school funded by Kanye West.  I know neither of these guys or their circumstance, so this isn’t a comment on their specific situations.

Transferring can be a positive option for an athlete being treated poorly by a coach or who is unfulfilled by the education provided at their original institution, but the majority of transfers are kids who would rather run from adversity instead of fight through it.

High school and college are supposed to be difficult under normal circumstances.  Physical, intellectual, and emotional growth are painful because they require people to accept their limitations.  For many elite athletes, it’s especially tough because their lives have been filled with lavish praise from coaches, teachers, parents, and peers.  Having your weaknesses suddenly exposed as the talent gap narrows is hard for many to accept.

Some choose fight and some choose flight.  Adversity, while unpleasant in the moment, spawns maturity.  Running to someone promising wondrous rewards without tedious work sounds great in the moment, but life’s chief rewards come wisdom gained through diligence.

I would never expect a 16-22 year old to understand any of that.  It’s beyond their capacity to embrace that concept.  There was TV commercial for an investment firm in the 1970s that featured the quote, “The reward for hard work is more hard work.”  I laughed out loud every time I heard it.  The concept was absurd.  The reward for hard work should either be wealth or time off, I scoffed.

I’m not laughing or scoffing any more.

Many transfers are trying to take shortcuts around the hard work and head straight for the reward.  They believe so deeply in their own talent that work appears to be unnecessary.  When coaches tell them they need to dig deeper, they toss away the shovel and run.

Indiana University Basketball coach Mike Woodson said something interesting the other day about his players beginning to understand the levels of hard work.  He said that once players realize there is a level of work and then another level of work, things get easy.  The basic tenet is, “If you outwork your opponent, you will out play them.”

David Mamet wrote the screenplay for The Untouchables, and it it Sean Connery’s character explains how to get Al Capone, “You wanna get Capone? Here’s how you get him. He pulls a knife, you pull a gun. He sends one of yours to the hospital, you send one of his to the morgue! That’s the Chicago way.”  That’s also – metaphorically – how you succeed in life.

Through the course of a life, it dawns on us that those who work hard earn the opportunity to continue working hard.  Digging deep allow us to dig deeper.  Coaches and bosses who demand our best are more likely to motivate athletes and employees to give it.  It might not always be pretty or pleasant, but morphing from kid to adult rarely is.

When I see reports of athletes transferring, it saddens me.  There are transformative moments in life, and the decision to look inward to solve a problem prompts them.  The choice to wander based upon the promises of salesmen posing as coaches can extend an adolescence that lasts a lifetime.

Transferring changes geography, but it doesn’t change the biggest problem facing a high school or college athlete because there is no portal to change who you are.  That transformation must be earned.