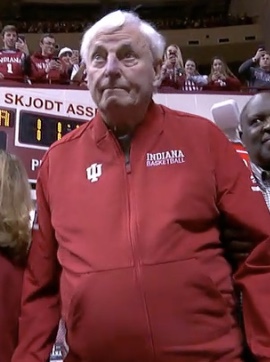 This was an undeniably emotional moment as Bob Knight made his first public return to Assembly Hall 21 months ago. Now that his jaunts to visit the program he made iconic are more frequent, it’s time to allow them to pass without fanfare.

After so many heralded returns, it might finally be time to allow Knight to slip in and out of IU Basketball events without notice or coverage.

Since Knight was fired over 21 years ago as the result of an ill-conceived and poorly executed zero tolerance policy he was incapable of adhering to, Knight refused all overtures of come back to IU or be honored in any way.

Statues have been erected inside and outside Assembly Hall honoring Knight’s three NCAA Championship teams, but Knight is featured in none of them, per his request.  Former Indiana athletic director Fred Glass routinely tried to bury the hatchet with Knight, to no avail.  Invitations were extended and rejected.

Knight and his wife moved back to Bloomington as they wanted to be near friends who might make the sunset of Knight’s fascinating journey through life more enjoyable.  There were rumors of Knight coming to Assembly Hall to walk around a bit.  He then attended a women’s basketball game with friend Bob Hammel.

Finally, in February, 2020, right before Covid disrupted raucous gatherings, Knight returned to Assembly Hall for a reunion during halftime of IU’s game against Purdue.  Alums over 50 years of age wept as Knight exhorted the crowd as many of his former players hugged him. Current students wondered who all the old guys were as they surrounded the emotional white-haired fellow.

The team stayed in the locker room rather indulge in a little history of the program they represented.  The focus failed to pay off as IU lost to the Boilermakers by 12.

When Indiana replaced Archie Miller with alum (Class of 1980) Mike Woodson, that opened the door for Knight to pop back repeatedly first to a practice and then to the Fan Fest.  Who knows how many other visits he has made in the half year since one of his favorites players and a successful NBA coach re-established connectivity to the 29-year Knight era?

Knight’s health is not great.  He has good days and bad as his memory fades bit by bit, but he still enjoys being around basketball – and that building and court where so many of his favorite moments occurred.

It’s good to have Knight back.  It always felt odd that he wasn’t around.  For those who attended Indiana between 1971-2000 and became basketball fans as a result, Assembly Hall was always the place where Knight furiously commanded his team and everyone else who crossed its threshold.  Now, he’s back.  The fury is gone, but the hair, gut, sweaters and stare remain.

So again and again, back Knight comes.  It’s not quite like Gene Keady at Mackey, where the torch was passed (mostly) smoothly to protege Matt Painter, but we have likely gotten to the point where media people no longer need to lurk in the corners to catch Knight walking in – or note his comings and goings in any way.

Despite Brand’s belief to the contrary 21 years ago, Knight belongs at Assembly Hall.  And he is there quite a bit these days.  Let’s leave it at that and allow him some peace, if he wants it.