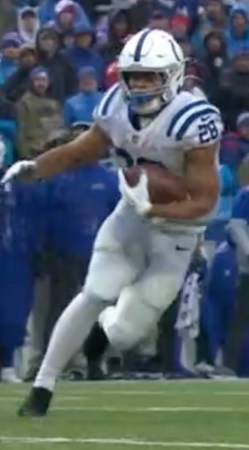 Jonathan Taylor was splendid against the Buffalo Bills, but if he wants an MVP it will take another six historically great games.

Colts running back Jonathan Taylor had a game in Buffalo last Sunday the likes of which has never been seen in NFL history, but winning the Most Valuable Player Award is still going to be a long and windy putt for the second-year Wisconsin grad.

Before last Sunday, no one had ever run for at least 175 yards, four touchdowns, and caught a touchdown pass – not Red Grange,  Jim Brown, Walter Payton, O.J. Simpson, Barry Sanders or Emmitt Smith.  But Taylor did.

This has Colts fans legitimately excited for the prospects of the Colts becoming the seventh team to ever make the playoffs after an 0-3 start.  It’s also fun to ponder Taylor as the next great back – a throwback who can lead the way to points and wins on the ground rather than relying upon throwing the football 40 times to outscore an opponent.

I see a more than a hint of Payton in Taylor’s stature, speed, and ability to find an extra couple of yards after creating contact.  He’s been that good.  Growing up north of Chicago, I watched every game Payton played from 1975 to 1987, and loved every carry as he darted past Brown as the NFL’s all-time leading rusher before retiring more than 4,000 yards beyond the Cleveland Browns great.  I don’t compare many to Payton – in fact, none.  Sanders and Smith were great in their own way, but they didn’t evoke “Sweetness” in the way Taylor does.

Even as excellent as Taylor has been over his first 26 regular season games, the cards are stacked against him being named MVP for several reasons:

It might not be fair to hold running backs to a standard of a record-breaking season to earn an MVP, but that is where the NFL is.  That is how important the quarterback is to winning games.

There is a factor in Taylor’s favor.  When he has run for 80 yards or more during a game in his career, the Colts are an undefeated 12-0.  The last eight times he hasn’t (including week 12 in 2020), the Colts are a winless 0-8 including the playoff loss in Buffalo.  How could one player’s value be any more obviously stated than that?

Jonathan Taylor is a special running back, and he is without question the most valuable Colt – although he would deflect credit to the offensive line and receivers who open the holes through which he runs.  But will the media be ready to anoint Taylor as more valuable that Patrick Mahomes and Tom Brady?  Not unless he puts together a six-game stretch as singularly amazing as his work in Buffalo.