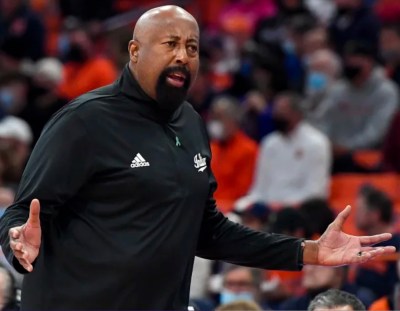 Satisfaction stemming from a loss makes very little sense to me, but in the case of Indiana’s double overtime defeat at Syracuse I will make an exception.

Syracuse isn’t a very good ACC team, but they are smart and can shoot.  That was good enough to put the Hoosiers in an 18-point hole during a listless first half, and cause an astounding 26 turnovers for the game.

Indiana roared to life in the second half, attacking Syracuse’s zone with the discipline and effort needed to expose it.  They rose from the dead – down six with under a half-minute to play – to force overtime, and then earned a second OT before finally succumbing to the Orange 112-110.

Celebrating a loss is the kind of thing fans try to avoid.  The point of the game is to win, and anything less than that should represent failure and bring sorrow – otherwise why keep score.  But this was different.

After years and years of watching Archie Miller and Tom Crean complicate Indiana basketball, Mike Woodson showed his Hoosiers how to beat a 2-3 zone.  You go three out, feed the middle, and kick to players left open.  Last night, those three were Trayce Jackson-Davis (31 points), Miller Kopp (28 points), and Parker Stewart (20 points).  IU hit 55% from the field, 41% from beyond the arc, and almost 75% from the line.

That’s a successful night against a team Indiana has failed to beat since Keith Smart hit “The Shot” to win the 1987 National Championship.

The 26 turnovers are a problem, but indifference to possessing the ball might be the easiest deficiency to overcome for a coach like Woodson, who delivers honesty to his players as though they are adults rather than trying to coddle and cajole them in understanding the importance of holding onto the ball.

Race Thompson was especially problematic as Indiana attempted to break down Syracuse’s zone.  He was charged with distributing (or shooting) from the middle.  His seven turnovers speak to a lack of both understanding and dexterity in delivering the ball.  Eight assists give Thompson a completion percentage of roughly 50%, and that is poor.  Thompson was a stalwart on the defensive end, but if the Hoosiers need to play against a zone heavy team in the future, using someone else in that role might be wise.

But now that Indiana has a coach who sees the game correctly and has no problem pointing out errors, it’s unnecessary for Indiana fans to spend considerable time doing it.  If that wasn’t the case, I would chastise Trayce Jackson-Davis for caressing rebounds like an easily squished loaf of bread.  He had six turnovers as Syracuse players poked the ball loose after Jackson-Davis had “secured” it.  That would bother me if I wasn’t certain it drives Woodson crazy.

I’ll spare myself the misery of chronicling Jordan Geronimo’s contributions to the game during his four minutes.  Suffice it to say having a coach help replace bad habits with good ones can be messy.  Same is true for Khristian Lander, who was banished to the bench until both Xavier Johnson and Rob Phinisee fouled out.  That gave Lander 13-seconds of regulation and both overtimes to regain trust.  If you need proof that Woodson’s leadership works, Lander’s energy under adverse circumstances should suffice.  He wasn’t perfect, but didn’t crap the bed either.

For the last five years (at least), I have felt detached from Indiana Basketball.  I still watched every game – even those against low or mid-majors behind the BTN+ pay wall – but sat shaking my head at the stupidity of the scheme, indifferent execution, and meaningless theatrics by coaches (clapping, pacing, squating, chugging, whining, etc…).

Indiana had become every other college basketball program where the coaches pretended to lead and a me-first culture was allowed to flourish.  Basketball is beautiful when played by a team committed to a common goal, and now it seems Woodson is successfully imparting that message to his first team.

This Indiana team had me back on my feet last night enjoying what became a loss to Jim Boeheim’s program.  That says a lot about the players, staff, and future of Indiana Basketball under a coach who gets it – and who we get.

2 thoughts on “Indiana loses in 2 OTs at Syracuse, but leaves fans smiling! How is that possible?”