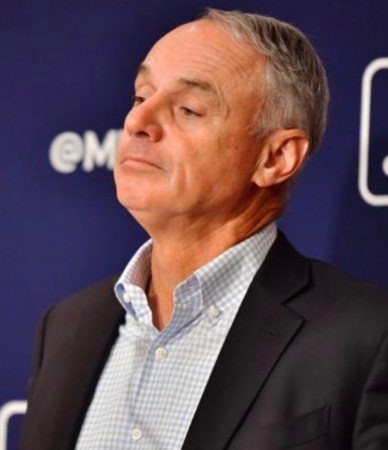 This greedy nitwit may be the face of baseball’s demise.

Greed is not good, and so I will have nothing more to do with Major League Baseball.

Dissatisfaction bordering up abject indifference has been brewing within me for several years, but the current work stoppage orchestrated by owners who don’t want to share our money with the players has pushed me over the edge.

My principle baseball allegiance is with the Chicago Cubs.  Growing up in north suburban Chicago, my dad used to pull me out of school one afternoon each spring for a visit to Wrigley Field.  I did the same with my son despite the three-hour drive from Indianapolis.  When my wife, son, and I lived six blocks south of Wrigley, I would throw my toddler Ryan on my shoulders and walk to Wrigley for afternoon games.

The point is, Wrigley Field is not just a ballpark to me, but a shrine filled with generational memories.  My displeasure is so acute, it has launched me headlong into Cubs indifference.  I would be as likely to throw $75 from my car window as use it to buy a ticket to watch the Cubs play in person.

There is no anger in me for Cubs ownership or MLB commissioner Rob Manfred – a pragmatic stooge hired by the owners only to bludgeon the Players Association into a bad deal that will squeeze as much of the fans’ cash as possible into the owners’ already fat wallets.  I ignore them, as well as the manifest unpleasantness their greed authors

On a micro level, the Ricketts family has shown what we always knew their foundational goal to be.  It has never been about winning for Tom and his siblings.  It’s always been about the money.  The Cubs were a poorly leveraged property that presented a unique real estate opportunity, and while Ricketts may know nothing about building a baseball roster, he knows about real estate.

So the Cubs under Ricketts are now in a position to wrangle obscene profits from a fanbase that doesn’t care one way or another about winning now that the dream of a World Championship was realized in 2016.  Ricketts and the Cubs staged the garage sale of garage sales last July and sold any valuable and well paid players to contenders for teenage prospects earning less than minimum wage who might grow into winners 10 years from know.

Out went Kris Bryant, Anthony Rizzo, and Javier Baez.  Kids all over Chicago wondered where their championship heroes went.  Disenchanted parents confused their kids with the terse reply, “Sold for parts.”  Why pay stars tens of millions when saps from all over America will pay to sit in the Friendly Confines to watch Nico Hoerner, Frank Schwindel, and Ian Happ?  Ricketts is a money grubbing louse, but he’s not stupid.

(This is a warning I am about to get pious as I spend other people’s money!)

If I were advising the Players Association and its leader Tony Clark, the message would be clear – as Manfred tries to break you, focus your energy on breaking the owners.  Get the players out in the media and into bars and schools to clearly explain the overt greed of the owners – and the pragmatic single-mindedness of Manfred.  Commissioners have always at least pretended to be good stewards of the game.  Now, the office is just a shill for the owners manned by a law degreed shark whose only meaningful responsibility is the put the union’s head in a vice during this negotiation.

Being party to the loss of the 2022 season might just save the game from ownership’s Jabba the Hutt level hunger for cash and higher franchise valuations.  Destroying baseball as we know it might be the only way to save it.

As for me, I will continue to avoid the property located at 1060 West Addison as I have for the last five years.  I will also cancel my subscription to the sports package that includes the Marquee Network.  How many times can I be amused by Ryan Dempster‘s Harry Caray impression or Billy Williams stories about Bob Gibson (the answer to that is actually somewhere between 70-80 time as I love Williams and still fear the late Gibson).

At some point, a major league is going to take for granted the fans whose love they leverage into billions of dollars.  The most likely candidate is baseball, and it could be happening as we speak.

It already has for me.