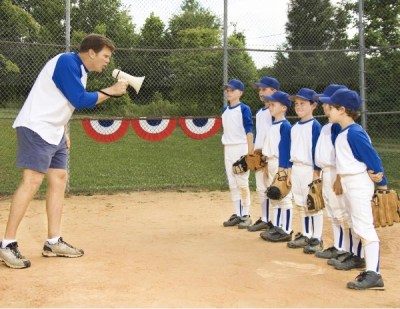 Here’s a bonus 11th tip for coaching youth baseball – Never use a megaphone!

It’s youth baseball and softball season, and that means it’s time for parents and coaches to destroy enthusiasm for what should be great fun for kids among friends.

Or they can choose to enhance it.  Let’s talk about how to do that.

Here are 10 easy to read but hard to execute tips for helping your kid or team fall in love with baseball – or at least not be scarred by it:

10 – After the game, buy treats!  Under no circumstance should you talk about the game after it ends.  The game was played.  It ended.  Now it’s time for ice cream, popsicles, or some other coveted delight.  Buy yourself one too!

9 – Pick travel parents!  Choosing players for a travel team based upon parents’ behavior is a great idea!  If the parents don’t get along, the kids will be miserable.  If the parents enjoy each other, the summer becomes a baseball-centric party.  Great players + ill-tempered selfish parents = despair.  Okay to good players + generous happy parents = happiness!

8 – Allow kids to express their emotions!  This is one I had some trouble with.  Strikeouts often cause a tightly wound kid to cry.  I used to put my arms around those kids, and explain about how baseball is all about what’s next instead of what’s been.  The kids continued weeping.  Each of the kids who cried wound up competing in a sport at an elite level.  Some ran cross country, some played basketball of football, and others stuck with baseball.  The most emotional kid I ever saw earned over $25M in the majors as a pitcher.

7 – NEVER hold a meeting after the game!  Earlier we discussed parents buying treats and avoiding the compulsion to discuss the game a kid just played.  This is for coaches.  Postgame meetings are held for one reason – a coach’s need to vent, and they are a waste of time.  It’s funny how adults always believe a kid or team cannot learn from a mistake unless they spend an hour pointing it out to kids.  Another reason is that the kids don’t hear a word of what the coaches say, and the parents want to get their kids and go home to live their lives.

6 – Thank the umpires!  Those are the only words you should ever direct to an umpire.  They are not well-paid, and do it because they love the game and want to help kids play.  They are imperfect and will only impact the enjoyment of the game if you yell at them and embarrass the kids.  And don’t forget umpires are in short supply because parents are driving them to choose another hobby.

5 – Teach the game!  Instead of choreographing movement and positioning fielders, explain the game and allow the kids the freedom to deploy themselves so they learn from their own successes and errors.

4 – Little League coaches are not Joe Maddon or Dave Roberts!  Youth coaches are well-meaning dads willing to volunteer their time to try to help kids enjoy the game.  If you disagree with their methodology, volunteer to coach next season.

3 – Never insult opposing players!  This sounds ridiculous, but 40-year-olds taunting 10-year-olds happens constantly.  It would be great if we were beyond trying to embarrass children by mocking them.  We aren’t.

2 – Smile a lot!  If you are too nervous to smile, bring a book to the game and read.  The successes and failures of youth baseball participants will not enhance their chances of succeeding or failing in life.  If you love every moment, your kid(s) likely will too.  And then when it’s over, you won’t feel like a moron for not enjoying watching your kids – and the kids of others.

1 – “Swing hard in case you hit it!”  Pitching coach legend Dave Duncan told this to his son Chris, with whom I worked at 101ESPN in St. Louis.  Chris became a first round pick and played several years in the big leagues before injuries ended his career.  An extension of this lesson is not to worry about the strike zone.  If the pitch is in a place where a kid can hammer it – hammer it.  If a pitch is in a spot where it cannot be driven, why swing?  The point is to hit it hard.  If Major League players ignore the rules of situational baseball, why should a 10-year-old shorten up with two strikes?