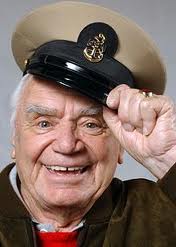 If anyone sees Ernest Borgnine driving down the road in his 45-foot motor home, follow him and when he stops take his keys and throw them into a pond.

On a Biography Channel piece about Borgnine, it showed him as the happy as a clam navigator of a giant RV.  It looked like a great way to spend the golden years of his life.  As it turns out, trying to keep one of these beasts out of the path of other vehicles is not a good way to spend a minute no matter how old the driver is (Borgnine is 93).

Through yesterday, I drove the motor home that is Indiana Pacers play-by-play man Mark Boyle’s base camp for his month-long walking tour of Indiana to raise money for the Indiana Children’s Wish Fund.  Mark is walking 500 miles in five weeks and a couple of days, and while he’s walking, someone needs to drive the bus to the next town.

I volunteered for two reasons – the Indiana Children’s Wish Fund is one of the outstanding grassroots charities in the country, and Mark is a very interesting guy with such unique perspectives that I felt getting to know him better was going to be fun.

When Krissy Myers sent a note telling me that the bus was 45-feet long and might be a little intimidating and maybe I might reconsider my commitment, I scoffed.  If the guy who played Quinton McHale in “McHale’s Navy” could roll all over America, how hard could that be?

Well, I’ll tell you how hard it is – on the open road, not so hard.  But at the end of every leg, the bus need to be parked.  Some people don’t like to parallel park a car.  Try it with a vehicle three times as long as a car.  Try piloting the beast through a town with tight streets and high curves.  Try getting in and out of a McDonald’s.  Hard?  Yep, and terrifying.

Disaster lurks around every corner.  Want to try taking a shortcut?  You won’t try that twice.  Shortcuts, and I like shortcuts under almost any circumstance, are death.

Yesterday on the final day of my career as an RV driver, I took the RV to the camping area where we had reservations for the night, I told Sandy – the owner of Lake Monroe Village that I wasn’t ready to park the bus.  I just came to make sure I knew where I was going.  She told me that she would like me to park, and then pick up Mark with her Toyota Prius.  I almost cried.

To know that I know had to park the behemoth once more was almost more than I could emotionally bear.  Fortunately, the culture of campers requires them to help an idiot like me, and several men served as flagmen as I clumsily backed the beast into slot 69 (insert your own 69 joke – I’m still too exhausted to engage in such frivolity).

Sandy asked Ralph, a camper seated in an adjacent site at a table filled with empty Coors Light bottles, if he would mind backing the bus in.  As much as I dreaded the thought of doing it myself, trusting a $200,000 bus to Soupy McRalph seemed an even worse idea and I soldiered up.  Ralph was not too lubed to guide me properly, and I repaid his work with yet another 12-pack of Coors Light.

So Mark takes today off and gets back at it tomorrow looking ahead to 14 more days of hoofing through the Hoosier State to raise money and awareness for a great cause.  Earlier in the week, he wrote in his excellent blog that because I fired him from 1070 The Fan a little over a year ago, that he was looking forward to firing me as his driver on Saturday.  He didn’t have to.  I happily retired.

The truth is that Mark’s firing was entirely due to my being unable to find a suitable position for his talents, and nothing to do with him.  His sending me out as a driver would have been entirely driven by my pronounced incompetence.  My only source of pride is that Mark’s first driver bailed after simply looking at the bus, and that Mark staunchly refuses to drive it at all.  I’m not sure that refusing to acknowledge a lack of skill should be a source of pride, but I’m clinging to anything at this point.

Regardless of my ineffectiveness as a bus pilot, I’m better off for spending that much time with such an honest and perceptive guy.  Mark’s view of media and life is uncorrupted by a need to compromise or say the right thing, so what you get in a conversation with Mark is an unvarnished look at politics, religion, or whatever else piques his interest at any given moment.  He doesn’t let pablum skate by without question.  Say something just to say it, and Mark will ask why a person believes what he just said.  It’s refreshing, and I only wish that I still programmed WIBC because I would find a place for him as a news/talk host, if he was interested in pursuing it.

My favorite moment of the week was in Nashville, Indiana, when we were trying to park the RV at a site run by a fascinating woman named Jackie, who told Mark that she has lived in every one of the 50 states for at least five months.  I was sloppily parking and trying to hook-up hoses.  She looked at me like a tourist looks at a baboon trying to stack blocks at the zoo, and I asked, “You feel sorry for me, don’t you?”  Her reply, “Should I?”  Perfect.

Despite enjoying the conversation, my career as Mark’s driver is over.  I would rather jump out of an RV while it’s moving than try to park one again.

Go to the website Mark is using to chronicle his trip to donate to the Indiana Children’s Wish Fund.  They do great work in giving kids with life-threatening diseases and their families something to look forward to in the most trying of times.